Tom Trbojevic is the unbackable favourite for the Dally M medal, but those who spent time with him at the Sydney Swans Academy reckon he could well have been a Brownlow contender had he stuck with AFL.

Trbojevic juggled AFL and rugby league in his teens, before turning his full attention to the latter. However, he was a standout in Australian Rules, spending time in the Swans Academy from the age of 14 until just before he turned 17.

His stint with the Swans coincided with that of Isaac Heeney, another outstanding prospect who was equally adept at league. Heeney stuck with Australian Rules, going onto became a mainstay for the Swans during a career that has netted 111 appearances to date, while Trbojevic has made almost the identical number of appearances (112) for his beloved Sea Eagles.

“In both scenarios, it would be hardly surprising. The fact we were able to get one of the two, we’re pretty happy with that.”

Trbojevic played a number of positions for the Swans during appearances in the state championships, representative games against GWS and a rep carnival in Albury. 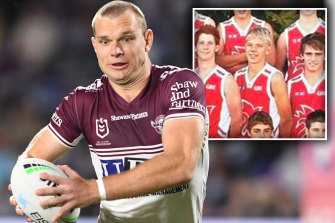 Tom Trbojevic was a talented league and AFL player, inset, in his teen years, but ultimately chose the rugby code.Credit:NRL Photos, Supplied

“The coaches didn’t take long to realise the kid was a talent and he had the necessary character,” Smith said.

“He had a really good attitude, was there to work, didn’t get distracted easy. He was a pretty mature kid and you could tell he was self-motivated, all those things you need.

“He learnt all areas of the game. There were times when he played as a defender, as a forward, as a midfielder. He had that athletic range, he had the ability to do that.

“I could see him running off the half-back [if he stuck with AFL], working off an opponent and providing run and drive, pushing that ball into the forward line. He’s big and strong, he could pick up big players and also pick up the smaller, mobile players.

“To be honest, it’s not a huge surprise to see the success he is achieving.”

The Swans weren’t able to sign Trbojevic until he had turned 18, by which time he had joined older brother Jake in the Sea Eagles system.

Heeney has no doubt that Trbojevic would have become a star had he instead opted for AFL.

“You look at him now, the athlete he has become, he’s a freak of nature,” Heeney said.

“I do follow the NRL closely and the numbers he is producing are ridiculous.

“You look at the players from the NRL, if there is someone you could swap from NRL to AFL, he would be one of them. He’s got a great physique for it, a bit of fitness and he would be a serious athlete in AFL or any sport really.

“You look at him and he’s just a great athlete.

“He’s like a current-day Jake Stringer or – and this is a big rap on his power and explosiveness – a Dustin Martin.

“It’s always nice to see a mate of yours doing well and getting success. He’d be right in contention for the Dally M. I’ll be cheering him on.”

Smith said the Swans always felt the pull towards rugby league would be too strong for the code to retain Trbojevic.

“When he got into that senior-type environment, he had to make a decision,” Smith said.

“I reckon he would have scratched his head for 60 seconds because Manly were right into him from when he was a young junior.

“I wasn’t too surprised he chose rugby, he loved the game and was bloody good at it.

“He’s made the right choice, you could safely say.”

Asked which AFL player “Tommy Turbo” most reminded him of, Smith said: “That’s a good question. Because he’s so big and powerful, but so good on his feet, I’d say maybe a Jake Stringer.

“He’s a very good athlete, has pace and is just so lean, a jumper and high flyer.”