Snap Shot is a weekly column taking a look at the lighter side of football.

The commitment that families of coaches make to the game is too often overlooked, which is why Snap Shot wanted to air the decisions Melbourne’s AFLW coach Mick Stinear and his wife Rachel made in the past couple of weeks.

As the Demons faced a must-win match against Fremantle in Perth in round eight, their baby was due, but not in a rush to arrive. 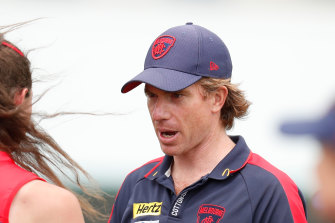 Melbourne coach Mick Stinear missed his side’s trip to Perth because his wife was due to give birth.Credit:Getty Images

Stinear, who has coached Melbourne since the AFLW started and endured the agony of near miss after near miss when it comes to progressing in finals (Melbourne won their first final last year, just before the season ended due to COVID-19) had an obvious, if not so easy, decision to make.

He stayed back in Melbourne rather than travel with the team in case the baby arrived while he was on the other side of the country.

The Demons beat the Dockers in a thriller to seal a spot in the finals but the baby remained unwilling to arrive until, it seemed, the home and away season was done, as the week before round nine continued without interruption for the Stinears.

So what were the Stinears to do as Mick had to head out to Cranbourne to coach the Demons against the Lions at Casey Fields last Saturday?

Rachel had the answer, and we can’t help but admire her for coming up with such a selfless plan.

Despite being 41 weeks pregnant, she told Mick she’d be prepared to go to the footy with him at Casey Fields in Cranbourne on Saturday so that if the baby decided to arrive midway through the match, he could throw his headset down and race off with her to hospital.

On Saturday, as the game drew nearer, the couple decided that plan was not necessary and Mick coached the game on high alert while Rachel remained in comfortable surroundings at home, cheering the Demons on from the couch.

The two-point win was enough for the Stinear baby to signal his intent to be part of finals action. Baby boy Jack Stinear arrived at 11pm on Saturday night, just hours after the Demons achieved a comeback victory over the Lions to finish the season in fourth.

Young Jack might just have something in common with premiership Cat Brad Ottens and premiership Lion Clark Keating.

The Giants’ Toby Greene has received eight free kicks in 2021 and not conceded one. 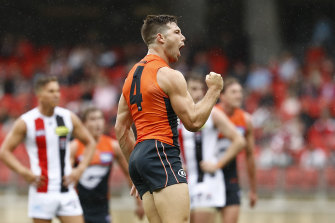 Toby Greene has not given away any free kicks so far this season.Credit:Getty Images

That Toby Greene, the player awarded more free kicks than anyone else in 2021, who has not given away a free kick in his past five matches.

Surely that’s enough to warrant a please explain to someone in the umpiring fraternity.

At the other end of the scale is Geelong’s reborn defender Tom Atkins, who is yet to receive a free kick in 2021 while conceding nine already.

The 25-year-old Cat is a hard nut but he might want to clean up that part of his game now that he is a defender.

While on free kicks, Atkins is one of just three players who have conceded more free kicks than Zac Bailey, the Lions’ forward famously denied a free kick in the dying seconds of Friday night’s thriller against Geelong.

Bailey has given away seven free kicks this season, earned four and received three.

While on the Lions, Snap Shot notes that William McDowell-White, the son of a Brisbane gun Darryl White, has joined the New Zealand Breakers to play in the NBL just a month after being added to the Boomers squad as a potential Australian representative at the Tokyo Olympics.

While it remains uncertain whether the 22-year-old will make the Olympic team, the former Brisbane Lions academy graduate is sure to be watched closely when he hits the boards in Australia during the NBL season given his pedigree. His father perfected the early jump and hover while flying for marks in his 268-game career with the Lions, a career that yielded three flags.

‘Libba’ makes himself at home away from the kennel