Adam Reynolds recently dismissed South Sydney’s attempt to break the impasse between the two camps, knocking back an approach about a two-year deal with an option in the club’s favour for 2023.

The Herald has been told as a mark of respect for Reynolds and his standing within the club, South Sydney has decided it will not withdraw its offer to the halfback despite his manager on Wednesday informing Rabbitohs officials that he would begin negotiating with rival teams. 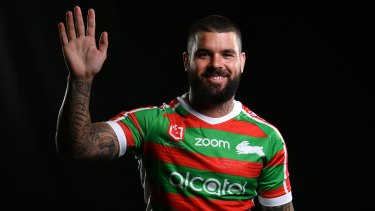 Adam Reynolds could be saying goodbye to South Sydney fans at the end of the season.Credit:NRL Photos

The Rabbitohs held a crisis meeting with Reynolds’ manager Steve Gillis on Wednesday afternoon to put forward the club’s final position, which was to not budge on their original offer of a one-deal worth $700,000.

The club was recently willing to offer a second year with the security of a clause that would provide them an opportunity to part ways if things didn’t work out after 2022, but Reynolds wasn’t interested.

It leaves the premiership-winning halfback on the verge of walking out of his beloved junior club as he chases the security of a three-year deal elsewhere, despite being willing to remain at Redfern for a guaranteed two-year deal.

The Rabbitohs had hoped Reynolds, like John Sutton previously, would understand the club’s desire to do one-year deals in the twilight of his career, especially given how confident he was in his own ability when he first went public with his frustrations. 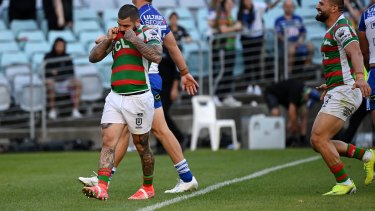 Adam Reynolds kisses the badge after scoring a try in the Good Friday clash against the Bulldogs last week.Credit:NRL Photos

“I still feel I have a good three, four years left in me. And that’s quality footy, I wouldn’t say that if I didn’t believe in myself,” Reynolds told The Daily Telegraph in February.

The Rabbitohs had hoped that belief in his own longevity and form would culminate in the halfback accepting one-year extensions.

The North Queensland Cowboys are in the box seat to sign Reynolds. However, as reported by the Herald on Monday, clubs are concerned about Reynolds’ body after revelations – denied by Wayne Bennett on Wednesday – that he has been on a restricted training program since fracturing his vertebrae in 2019. Three clubs have told the the Herald about their reservations in signing Reynolds.

However the Cowboys find themselves in a desperate situation trying to turn the tide after a dismal start to the season and may be willing to take a punt on Reynolds and offer him a lucrative three-year deal to lead the revolution under new coach Todd Payten.

The Cowboys are expected to be without Michael Morgan, who is close to announcing an immediate retirement as he battles an ongoing shoulder injury, while dumped halfback Jake Clifford is bound for Newcastle next year.

There’s a feeling at the Rabbitohs that Reynolds’ manager, who also represents winger Alex Johnston, had hoped the same public outcry that helped earn the winger a new deal last year would have a similar impact this time around. Although the club has maintained the only reason it was able to re-sign Johnston was because of Ethan Lowe’s medical retirement and not the pressure from fans to extend one of their favourite sons.

Although moving on from South Sydney at the end of the year, coach Wayne Bennett said he would like to see the club find a way to keep the halfback.

“When you’ve got an experienced one, I don’t like to let him go,” he said. “I’m not going to be here, it’s not my team next year. I’m not the one who is going to coach it and manage it so it’s the club prerogative.