The Western Bulldogs say they will adjust to Queensland’s tight protocol restrictions and embrace their prime-time billing in Saturday night’s knockout final against the Brisbane Lions at the Gabba.

The Bulldogs will remain in Tasmania until Friday, before leaving for Brisbane, where they will spend the night ahead of their semi-final. 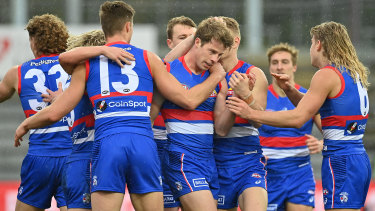 Mitch Hannan is congratulated by his teammates after slotting a goal in the elimination final against Essendon.Credit:AFL Photos

Coach Luke Beveridge had hoped the knockout clash would be given an afternoon time slot, as he feared his players would be confined to their hotel rooms all day per Queensland health restrictions.

But a Bulldogs spokesman said a deal had been done where players would be allowed to leave their rooms but remain on the same floor and exercise, before leaving for the ground and a 7.20pm (AEST) opening bounce.

The AFL considered an afternoon or twilight clash but the Bulldogs were appeased by players being allowed to leave their rooms. A night clash should ensure a capacity crowd, with this the first match at the Gabba in recent times without restrictions, while also delivering maximum broadcast ratings.

An AFL spokeswoman said the Bulldogs were “completely fine” with the night game, while the league’s general manager of clubs and broadcasting Travis Auld said: “It has been an incredible start to the finals series and with 100 per cent capacity crowds returning in Queensland this weekend, we look forward to seeing members and supporters pack the Gabba for what is shaping up to be a great contest”. 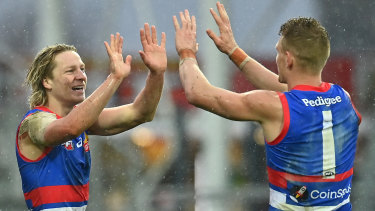 Cody Weightman of the Bulldogs is congratulated by Adam Treloar at a wet Launceston.Credit:AFL Photos

The Bulldogs have yet to confirm their departure time from Tasmania on Friday, as this will likely depend on whether they can train in Brisbane that day.

Bulldogs defender Alex Keath said the team would handle any restrictions, as it had done throughout the year.

“I have been over to Perth a couple of times in the middle of the year, had a very similar set up there, Joondalup for a portion of the week, then went into a hard quarantine in the city just prior to the game. If it’s similar to that, we have been through it before,” he said.

“It’s not ideal, but you can get up and move around the hotel, (and) keep yourself going during the day. (The) sleepy heads like a bit of a nap in the arvo before a night game. It will be fine.”

Jack Macrae, Tom Liberatore, Adam Treloar, Lachie Hunter and skipper Marcus Bontempelli were all superb in the cold and wet conditions, the Dogs regaining their shape around the contest. They are the No.1 handball differential team in the league, and will challenge the Lions at stoppages.

“I think we built throughout the game. As I say, we were under a lot of pressure coming into that game. It was a difficult three-week period for us,” Keath said.

“I don’t think we have completely brushed that aside, but it was good to play some strong footy against Essendon, who are a really dangerous side … it was a really pleasing performance to screw our guts up a bit, get through a game like that, and get a really pleasing win.”

“I have seen a little bit of that commentary. Cody, he won’t take too much notice of it,” Keath said.

“I love playing with him. Around the group, he has just added so much. You have seen him on TV – he is just smiling all the time. Nothing really worries him at all. I think the free kicks that happened weren’t his fault at all. He puts himself in great positions.”

The Lions must decide how best to replace forward Daniel McStay and whether that involves another marking tall or going small, while their midfield will need to tighten after giving Melbourne too much room. Key defender Harris Andrews has been in modest form and is carrying an injury, which may be limiting his output.

Finch and Hooper in fiery clash