One fairytale is over. Somehow. The other lives on. Sydney now stand just one win away from another AFL premiership after putting an end to Collingwood’s miraculous September charge with a heart-stopping one-point win on Saturday.

The Swans will now meet Geelong in next weekend’s grand final at the MCG after a first-quarter blitzkrieg initially put the Pies on the ropes – although they had to endure a predictable late surge from the visitors and hold on for grim death to get it done and seal this 14.11 (95) to 14.10 (94) victory. 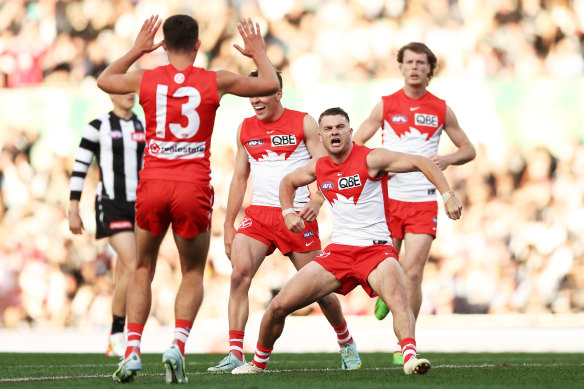 Sydney’s Tom Papley celebrates one of his three goals against Collingwood at the SCG on Saturday.Credit:AFL Photos

As predicted, this preliminary final was an absolute belter, and the atmosphere generated by the 45,608 fans in the house – the third-biggest crowd in the venue’s history – was one to behold. These two teams, who traded blows all evening, gave them their money’s worth and far more in this spiteful, pulsating contest. You couldn’t take your eyes off it for a moment.

There was no shame in the final outcome for the Magpies, who repeatedly did things this year that everyone else thought were beyond them, and gave absolutely everything they had to the bitter end.

And it went right to the end of the bitter end. In search of the winning goal, Collingwood fell agonisingly short, with time expiring after repeated ball-ups and scrambles inside their forward 50, before the siren sounded and shattered their hearts.

A few weeks earlier, also at the SCG, Sydney snapped Collingwood’s miraculous 11-game winning streak to lock in a top-four finish. The question here was whether playing just one game in three weeks, having won their qualifying final after observing the pre-finals bye, would lead to any degree of ring rust. 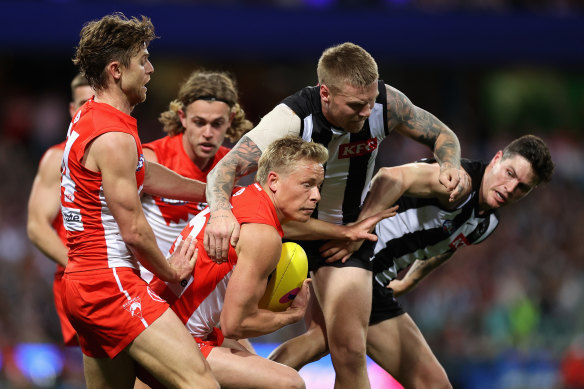 The other question was whether the return of Jordan De Goey, who missed round 22 due to injury, or a renewed focus from coach Craig McRae on the supposedly cramped dimensions of the SCG, would make any difference in the rematch.

The answers were mostly emphatic from the Swans. From the opening bounce, they were ferocious, kicking the first four goals of the game – through Luke Parker, Dylan Stephens, Ryan Clarke and Tom Papley – to open up a 26-point lead before Collingwood had even registered a score.

It meant the Magpies would be playing catch-up all afternoon – a position they weren’t exactly unfamiliar with and, indeed, have relished in. They almost did again, kicking seven of the last nine goals.

The Pies’ history of stunning comebacks and miraculous narrow wins meant that Sydney could never truly relax. It got nervy deep in the third quarter, when the visitors outscored them three goals to two, and a miss after the siren from Isaac Heeney left the margin at 23 points and door ajar for another fantastical finish. 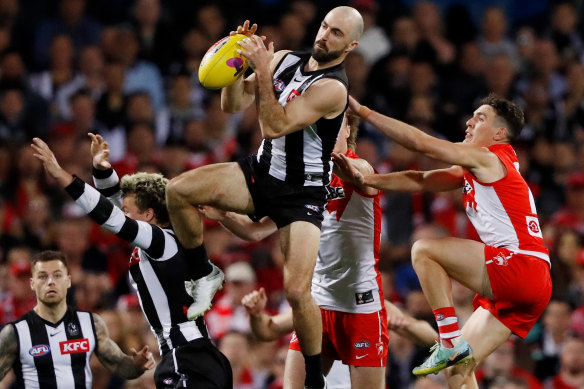 An eight-minute arm wrestle followed at the start of the final term, before the Pies drew first blood with a snap from Patrick Lipinski made it three consecutive goals to Collingwood for the first time in the match. A sense of panic was visibly setting in, on the field and in the grandstands.

But Papley got the goal Sydney desperately needed when he was awarded a questionable two-on-one mark, despite shoving Darcy Moore in the back and side, with about10 minutes to go. Yet the Swans couldn’t find the killer blow, and seemed to be running out of gas.

Brody Mihocek marked and goaled from the top of the square to cut it back to 15 points. Then Will Hoskin-Elliot snapped, and they needed two goals in four minutes. A smothered clearance kick from Ollie Florent fell to Steele Sidebottom, who cut it back to three points – the tightest margin of the night. But they had nothing more to give. 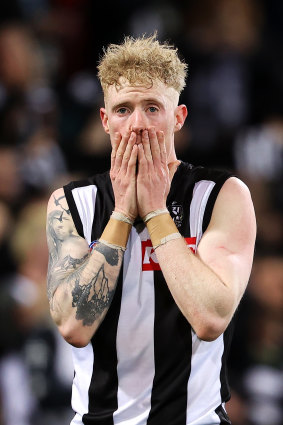 A dejected John Noble after the final siren.Credit:AFL Photos

Lance Franklin, monstered by Melbourne’s Steven May a fortnight ago, defied those who went the early crow and suggested he’d run out of juice. He kicked 2.1 but beyond the numbers had a big influence on how things played out in Sydney’s forward line, due to his sheer presence. The best that Franklin’s first match-up, Brandon Maynard, could do was try to wipe the oil off his arms. Jeremy Howe and then Darcy Moore were sent to Buddy, whose career might indeed be over next weekend – if Sydney can send him off on the right note.

The Swans, perennial finals contenders, have done a remarkable job to put themselves in a position to contend for the flag. They have rebuilt their list at rapid speed, spending just two seasons out of the top eight in 2019 and 2020 as the old guard moved on and the new breed stepped up.

Only two players on their list, co-captain Luke Parker and Sam Reid, were part of the team that won the 2012 grand final – but it seems only Parker will get a shot at adding another medal to his collection, with Reid subbed out early in the third quarter with an adductor strain.

The 30-year-old has had a career limited by a wretched run of injuries, but had fought back from almost being delisted at the end of last season to become a pivotal member of this new-look Sydney team. His body may have failed him again at the worst possible moment.

Collingwood also used their sub, with Mason Cox (groin) withdrawn in the third term for Nathan Kreuger, in what felt much more like a tactical move.

‘You will be prosecuted’: Seibold’s lawyer issues social media warning