Sydney are prepared to re-sign Lance Franklin to a new deal before the end of the season – even if it leaves open the possibility of the veteran being injured after he puts pen to paper.

The Swans accept there is an element of risk but are prepared to take it on out of respect to a man who has become an iconic player at the club. 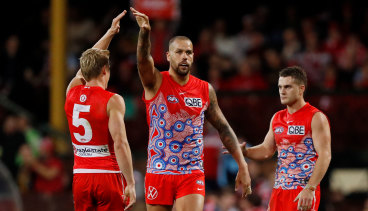 Lance Franklin is in the last year of his blockbuster contract.Credit:AFL Photos

Franklin has told the club he wants to play on, and the Swans are keen to see him don the red and the white for a 10th season. It is a prospect few believed was likely when he sensationally left Hawthorn on a mega nine-year, $10 million deal at the end of 2013.

The Swans are tight-lipped on contract talks with Franklin, but it is commonly accepted he will be taking a significant pay cut to play on next year.

A rival list manager has said he is an extremely difficult footballer to value given his age and status as a generational player.

Franklin, currently equal eighth in the Coleman Medal race with 29 goals from11 games, is on track for another 50-goal season – a benchmark that another industry source said would normally command a deal worth $600,000-$650,000 a year.

But this insider estimated Franklin to be worth about $400,000 next season given he turns 36 in January and will not have his price driven up by other clubs. Franklin and his family are settled in Sydney, and he is heavily invested in snaring a flag for the Swans.

Franklin is past his peak but his output remains arguably much better than the average footballer. Just three weeks ago, his bag of five goals, including three in the final quarter, propelled the Swans to a come-from-behind victory over Richmond.

Franklin finished 10th in the Swans’ best and fairest last year with 51 goals.

Factors likely to be considered in the size of the contract include his standing at the Swans, his on-field performance, the club’s tight salary cap situation and his considerable marketing value in a non-traditional football city.

The Swans have modified Franklin’s training after a raft of soft tissue injuries limited him to just 10 games in 2019-20. They have been careful in their management of his game time so he can complete the required strength and running work to protect him from muscle strains. He has played 29 of a possible 36 games since the start of last year.