It may have come as a shock to some corners of the AFL universe, but a bemused Nick Blakey says the sudden rise of the Sydney Swans hasn’t exactly come out of nowhere.

It is, he says, the natural culmination of a carefully charted plan by the club to change their style of play and return to finals contention – one that Blakey and two other teammates have committed to seeing through for at least the next few years. 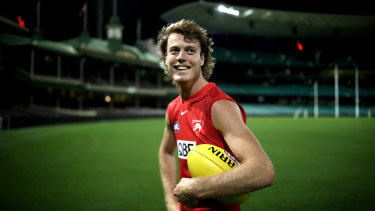 Nick Blakey has signed a new contract with the Sydney Swans, keeping him at the club until 2024.Credit:Phil Hillyard

Blakey, James Rowbottom and Chad Warner, three of the Swans’ best and brightest young talents, have all signed contract extensions.

Blakey, 21, has penned a new deal that will keep him in red and white until the end of 2024, describing the move as the biggest “no-brainer” of his time in the game.

Rowbottom has also signed on until 2024, while Warner, who this week became the third consecutive Sydney player to earn an AFL rising star nomination, will remain until 2023.

One of several academy products in John Longmire’s side, Blakey began his senior career at the Swans in 2019, the first year they failed to make the eight in a decade.

A swift return to the finals looms this season, having captivated the AFL world with stunning wins over top-four sides Brisbane and Richmond in the first three rounds, powered by an exciting, direct and clinical style of play that many have contrasted with the dour, defensive stereotype of the Swans under Longmire and Paul Roos.

“We were confident going into the season,” Blakey said.

“Obviously, if you’d have said we’d be 3-0 we’d be stoked versing Richmond and Brisbane already. We always thought we’d be really competitive against those teams, but it was still an unknown … it’s still early and we’ve got a lot of work to do still, but to turn the tables a little bit this year, we’re very happy.”

The new-look Swans, who host Essendon at the SCG on Thursday night, haven’t simply blossomed overnight.

Despite finishing 16th last season, Sydney sent plenty of scares through the competition when they fell one goal short of beaten grand finalists Geelong in their last game, despite having led for most of the day.

Blakey said the arrival of new assistant coach Don Pyke has given the process a nudge in the right direction, but the attacking, aggressive blueprint was already there.

“Everyone’s saying we’ve had a massive game plan and everything like that change,” he said. “But we were trying to do this stuff last year.

“Our execution just wasn’t as good. We’ve got Bud [Lance Franklin] back, Isaac Heeney’s played every game, Sam Wicks has come in and been on fire.

“Having a healthy list helps – and then the young boys, getting games into them the last couple of years, now they’re really confident at that next level. There’s been a whole heap of things that have helped us play the way we are, but it hasn’t come from just one off-season, that’s for sure.”

Blakey was nominated for the AFL Rising Star award in 2019, when he was being used as a key forward by the Swans, but has since been shifted onto the wing.

His father, John, was a long-time assistant to Longmire at the Swans, but left to join North Melbourne this season, forcing Nick, who grew up predominantly in Sydney, to move out of the family home and into a share house with teammates.

He is yet to stand out this season and admits he has struggled tat times due to Sydney’s preference to move the ball through the middle of the ground, but is confident things will break for him soon.

“Two weeks ago [round one] probably wasn’t my best game,” Blakey said. “It’s been a bit slow overall, but that will start to turn when teams try and stop us going up the corridor – we’ll have to find another way.

“The role I’ve been playing has been out on the wing and trying to get in and help defence. I’d obviously like to get a bit more of the ball, but I’m helping the team, I guess.”