Rabbitohs prop Tevita Tatola will be free to play Saturday’s preliminary final against Penrith after avoiding suspension for a chicken wing tackle on Cronulla’s Ronaldo Mulitalo.

Tatola was issued a grade one dangerous contact charge for his awkward wrestle with Mulitalo, and faces either an $1800 fine with an early guilty plea or $2500 if he challenges unsuccessfully at the judiciary.

His availability avoids a potential dearth of front-rowers for the grand final qualifier given Tom Burgess is still sidelined through suspension for another week.

Coach Jason Demetriou is hopeful Johnston, Arrow and Havili will all be fit with a seven-day turnaround into the Panthers clash.

“Siliva has got a calf problem, so fingers crossed the physio thinks it is not too bad and he might be OK,” Demetriou said. 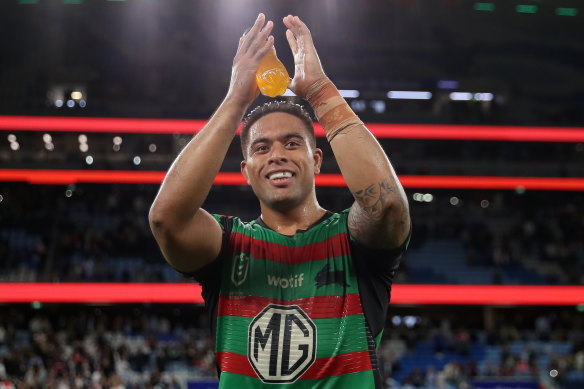 “Jai has just got a groin thing that he has carried for weeks, but he will be fine.

“AJ has got a hip flexor. Again they are not serious, but fingers crossed we can get stuck into the rehab and seven-day turnaround we can get them back.”

Roosters-bound outside back Jaxson Paulo would come into reckoning if Johnston is unavailable, having been rocked by social media abuse after a forgettable round 23 outing against the Panthers.

Davvy Moale and Daniel Suluka-Fifita shape as bench replacement options should Havili be ruled out.

Parramatta’s Tom Opacic is in doubt for Friday’s trip to Townsville after a hamstring injury cut short his night against Canberra.

Back-rower Marata Niukore is his likely replacement due to his strong defensive performances at centre in the past.

Bryce Cartwright and Nathan Brown are the most likely candidates for a bench call-up should Niukore be elevated to the starting side, though Brown has only played once in the past six weeks due to a reserve grade suspension and thumb injury.