Here is a parable about Tasmanian football.

Graeme “Gypsy” Lee, my first footy hero, died earlier this year. Gypsy inspired East Devonport to its historic 1968 premiership win, which was magical and memorable in the same way that the Western Bulldogs’ 2016 premiership win was. As Gypsy lay dying, East Devonport announced it could no longer field a senior team. My footy hero died not knowing his footy club didn’t exist any more. 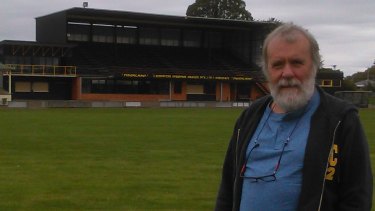 Martin Flanagan on the Longford ground where he played his first game at the age of six.

One of the first projects I got involved in after returning to Tasmania at the start of 2020 was a book about football on Tasmania’s wild west coast. On the west coast over the past century, there have been eight different football associations and around 100 different football clubs – today there are no football associations and only two clubs. The last great Tasmanian grand final I saw before moving to Melbourne in 1985 was two years earlier on the north-west coast between Smithton and Cooee. Today neither club exists.

When the Carter report on Tasmania getting an AFL team came out last week, I declined radio requests to talk about it. How do you say (yet again) that the game is at risk of dying in Tasmania and, if it dies down here, it can die anywhere? It’s time people contemplated the fact that Australian football is a 19th century invention and your chances of replanting it in the 21st century are virtually nil. You’ll be fighting e-games, fewer people playing sport, nobody wanting to go on committees etc. What the example of Tasmania tells the rest of Australia is that we need to think about the future of the game differently – we desperately need a vision that comes from the ground up as well as the top down.

The best thing for me in footy right now is following Longford Football Club (established 1878). My family has history in the district going back to the 1830s. In the 1950s, Longford were state premiers under the leadership of Fred “Mulga” Davies, after whom the old wooden grandstand is named. Fred died relatively young. When Fred’s widow Joan died long years later, her ashes were scattered on the ground in front of the old stand. This is the love story of the old grandstand and the forward flank it faces. 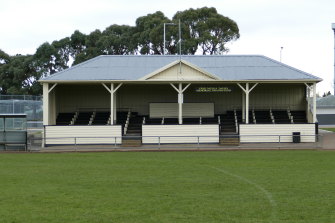 The old wooden grandstand at Longford.

Local footy is no less spirited than the AFL. It’s less polished but, once your eye adjusts, you see that skill is still a determining factor in the game. Then there’s the epic setting. Forty kilometres to the south, the green paddocks end and a line of blue mountains called the Western Tiers rise. Two weeks ago, the sky coming up from the Tiers was a livid black with a bright, vibrant rainbow.

To the north was a completely different sky – genial blue with huge white-grey clouds lipped with sunlight. In between was this vast Australian landscape with mountains and paddocks and trees and, in the middle of it, 40 young blokes were tearing into packs because this game is about something. It’s about local pride. They’re playing Bracknell from 20 kilometres away. My idea of footy heroes has changed – now it’s people such as Archie Blair, the Longford president, a groundsman at a local school. Local footy isn’t peripheral to the game – it is one of its vital organs.

The AFL’s attitude towards Tasmania was complacently colonial from the outset. Such value as the island had in the eyes of the AFL’s master strategists was two-fold – as a television market and as a breeding ground for AFL recruits. It was taken for granted that the state would stay loyal to the code no matter what. The relationship of the AFL’s leadership with the grassroots Tasmanian game was conducted entirely through bureaucratic channels. What could possibly go wrong?

Five years ago, the president of the Glenorchy Football Club, John McCann, said, “The footy ecosystem in Tasmania is sick.″⁣ It’s one of Tasmanian football’s great historic utterances, but no-one listened. Who was he? He was just the president of a Tasmanian club. But that’s also why he knew what was actually going on.

I want to say thank you to the AFL for giving us this weekend’s two finals, but let’s be frank, you owe us. You owe us big time. Without us and people like us, you don’t exist. The importance of the Carter report is that it acknowledged the natural justice of the Tasmanian case. Carter has wholly reversed the terms of the debate by writing: “It seems fair to argue that the onus of proof is not on Tasmania to justify its inclusion. It is on those who say it should stay excluded.” You’d have to be someone brave and a bit thick to step into that space. Someone like Jeff Kennett.

I agree with the Carter report that the whole matter of a Tasmanian team is much more complex than is commonly thought. Notwithstanding the uncertainties, Carter recommended relocating an existing AFL club. I don’t believe relocating North Melbourne here will work. I don’t know anyone who does. St Kilda might be a chance. In the ’60s, half the island barracked for the Saints because of Darrel Baldock and Ian Stewart, so there is a memory of St Kilda in Tasmanian footy.

What I do know is that the movement for a Tasmanian team is better organised than ever before and it has a leader like it’s never had before. Premier Peter Gutwein is a Liberal like Scott Morrison, but there the comparison ends. Sports rorts was a deeply cynical assault on the culture of Australian community sport done behind closed doors. Then, with cameras watching, Scott Morrison ran water to the Australian rugby league team in a Kangaroos shirt to pass himself off as a rank-and-file product of Australian sporting culture. Peter Gutwein’s not like that. He’s authentic. 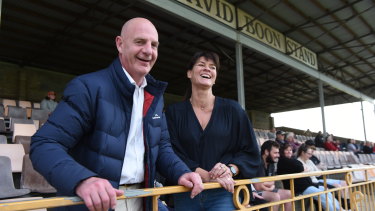 Authentic: Peter Gutwein watches his son playing football from the David Boon Stand in Launceston with his wife Amanda.Credit:Sarah Rhodes

Gutwein played senior footy in Tasmania and the WAFL. I heard him speak at the launch of Gravel and Mud, the book on West Coast footy. He spoke about footy culture and what the game means. I didn’t disagree with anything he said. He’s also seen by most Tasmanians as having dealt efficiently with the COVID crisis. In relation to Tasmania, the AFL now has to deal with something it’s never dealt with before, a popular premier with a football vision more deeply rooted than their own.

This weekend, we welcome Sydney, Greater Western Sydney, Essendon, and the Dogs to UTAS Stadium, previously York Park. I have stories for that ground going back 100 years. The new stadium is a complete remake of the original, but I am pleased to say the power of the ground as a sporting theatre is undiminished. I’ll see the Dogs on Sunday but will miss Saturday afternoon’s Sydney derby. Longford’s playing South Launceston in the qualifying final.