All it took was some lightning-quick hands to shift the ball out to his winger and Latrell Mitchell instantly won over a small group of South Sydney fans who were never going to miss their new pin-up put through his paces for the first time at Redfern Oval.

Mitchell officially started life at Souths just after 6.30am when he reported for training at his new club more than an hour early. 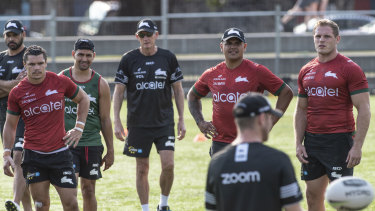 Latrell Mitchell was surrounded by Souths royalty during his first hitout in the red and green on Tuesday.Credit:SMH

The 22-year-old emerged from the tunnel at 7.58am wearing a red training shirt with the No.9 jersey, then went about running and passing and getting to know his new teammates and staff, including the man he's forever been compared to, Greg Inglis.

"Latrell has made a decision he's happy with. He has some good mates he's played with here and he's a big plus for our team. He will go a long way to helping us win a premiership,'' Souths hooker and Mitchell's NSW and Kangaroos teammate Damien Cook told the Herald.

The giant stature of Mitchell, his laidback walk and beaming smile made it impossible for those at the inner-city ground on a sunny Tuesday not to compare the former Rooster and the retired GI, who is 10 years his senior. Both players were in big demand when signing autographs after the session.

Just how quickly Mitchell can adjust to life in Inglis' old No.1 jersey will be the biggest talking point amongst Souths fans until their round-one clash against Cronulla.

Cook pointed out Inglis often returned to pre-season training heavier – Mitchell naturally appeared solid – but always stripped down in time for the start of the NRL season.

"Having watched Latrell's Instagram account he's been pretty active,'' Cook said. "I think he'll be happy here. For a young kid who has done so much at the club [Roosters] he did, he's got a new challenge now in front of him, and I'm looking forward to being a part of it.

"He's a very proud Indigenous person. Every team has Indigenous culture and players, but here at the Rabbitohs we have the biggest following and that culture.

"With Cody [Walker] here as well – he's the captain of Indigenous All Stars  – and with 'Jimmy The Jet' [James Roberts], some of the biggest Indigenous players in the game are at this club, and together they will lead the way for other Indigenous kids coming through and inspire them to do what they're doing.

"If Latrell plays fullback, to have a player like him up the middle, he'll only create good quick play-the-balls and we'll play off the back of that."

Mitchell missed a vital week of training last week as he was given time off by the Roosters to seal his Souths deal.

And he could lose another precious few days of preparations when he joins camp with the Indigenous All Stars next month where he already leads the way with fan polling in the fullback and centre positions. He could be joined by new Souths teammates Walker, Roberts, Alex Johnston and Braidon Burns.

Cook caught up with Mitchell in his hometown of Taree before Christmas when he was one of several Blues to attend a bushfire community event.

He was happy to stay out of Mitchell's path during opposed sessions, while Cook said he had already teased Adam Reynolds about potentially losing the goal-kicking duties.

Souths have a clean bill of health, with Campbell Graham the only player forced out of Tuesday's session because of illness.

Officials remain hopeful they can lure Jai Arrow from the Gold Coast a year early in time for season kick-off.