Michael Voss was not easily impressed in his first stint as senior coach that began way back in 2009 when he was just 33.

The triple-premiership Brisbane Lions captain had only been retired for two years when he was appointed senior coach the day after Leigh Matthews resigned. 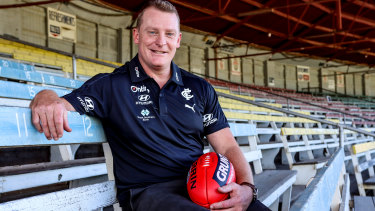 He won his first match six months later with 17 former teammates in his side, and a final in his first season.

Carrying enormous self-belief, Voss then had a fateful trade period and the club disappeared from the finals for 10 years before Chris Fagan led them back to competitiveness.

By then Voss was with Port Adelaide alongside Ken Hinkley, learning what it really took to be a coach – to lead, to teach and to delegate.

On Thursday, Carlton decided to give the 46-year-old a second chance at the helm.

His Port colleagues say he is ready and are rapt he earned the gig.

The man, himself, is grateful to both Port and the Blues for having the courage to back him in.

They will, in return, get the best he has to offer as he knows he is fortunate to get a second crack at coaching, with his motivation to succeed broadly defined.

“In some ways I’m actually feeling a greater responsibility that I am representing a few people who fall into that category,” Voss said.

To get to this point, he has studied, taken overseas trips and spent time self reflecting, so he knows what is required to succeed in the role a second time around.

He is, in many ways, a different person to the brash Brownlow medallist who became his generation’s most inspiring captain before being parachuted into the top job.

When asked whether he micromanaged during that period, he says “control freak” would be a better description, but it’s not the self awareness that resonates most; it’s Voss’s understanding of the impact his behaviour had on others.

“People don’t feel like you trust them. I didn’t get that at the start, but I well and truly get that now and the one thing that our group will feel is they will feel trusted…with that trust comes clear accountability as well to follow through on the things they say they will do,” Voss said.

At Port Adelaide he saw how Hinkley managed people – delegating, empowering and then accepting the responsibility he had to hold them to account.

Naturally caring and good-humoured, he realised that leading as a coach required a different skill set to the one that set him apart as a player.

“If I was guilty of anything in my first gig at Brisbane, I had really high expectations and [when] anything was done I was hard to impress,” Voss said.

“I probably didn’t give acknowledgement. If I fast-forward eight years I now give greater attention to celebrating those moments.”

Players at Port Adelaide say Voss developed a greater appreciation that each individual is wired differently and what worked for him as a player didn’t necessarily work for everyone. It’s a familiar tale, but hearing Voss talk about players now is to hear someone ready to listen to them as much as direct them.

“Their environment has changed,” he said.

“What they are exposed to growing up now [and the] level of complexity in their lives is far different to what I ever experienced when I was growing up.

“I have a deeper understanding of them and some of the challenges they face as a player. I have really tried to bridge that gap.”

A saying he has adopted – “from class to grass” – recognises that coaching is about teaching.

“Let them self discover and make mistakes and be creative and not get it 100 per cent right, and then coach them through those moments,” Voss said.

Voss and Carlton are ready to flourish together. They appear a good match.