Geelong wingman Isaac Smith said Melbourne defenders Jake Lever and Steven May “made us look like fools” when the teams last met, and the Cats have vowed to make amends in Friday night’s preliminary final in Perth.

The Cats ceded a 44-point lead and were beaten by a post-siren goal from Max Gawn when the two clubs clashed at GMHBA Stadium in round 23, the win securing the Demons the minor premiership. 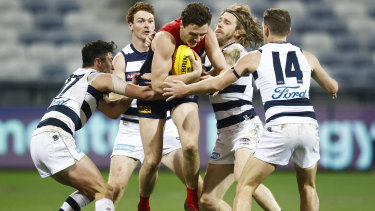 Star Demons defender Jake Lever taking on the Cats in round 23.Credit:Getty Images

Tom Hawkins booted four goals on May that night, but the latter still had nine marks, while intercept king and fellow All-Australian Lever had 22 touches, including eight marks.

Smith, the three-time premiership Hawk in his maiden season with the Cats, said the Demons posed several problems ahead of their Optus Stadium clash. 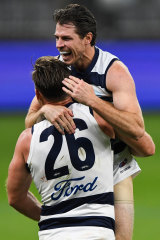 Isaac Smith and Tom Hawkins celebrate a goal in the Cats’ semi-final win over the Giants at Optus Stadium.Credit:AFL Photos

“They have got an unbelievable midfield, with Maxy (Gawn), ‘Trac’ (Christian Petracca), (Jack) Viney and Clayton Oliver so it’s going to be won and lost in the contest, like most games of football,” Smith said on Monday.

“But they also set up the ground so well defensively and Lever and May certainly made us look like fools in round 23.”

The Cats know the way in which they use the ball entering attacking 50 will be crucial, given a recurring theme of the Demons’ four defeats and a draw this season has been opponents making Lever, May and rebounding half-back Christian Salem accountable as often as possible in one-on-one contests.

“Probably how you enter the forward line and don’t kick it straight to Lever like we did in round 23,” Smith said.

“[But] there will be a lot more things that go into the game than that. ‘Kosi’ Pickett, both times we have played them this year, has kicked goals (one in round four, three in round 23). (Bayley) Fritsch has been solid. They are a good team.” 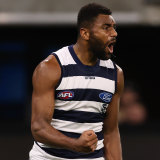 The Demons also won, by 25 points, when the teams met in round four at the MCG, an afternoon when Hawkins inadvertently left May with a fractured eye socket.

For the seventh time under Chris Scott, the Cats are one win away from the big dance, in this case the chance to seek redemption for last year’s grand final loss to Richmond.

A qualifying-final defeat to Port Adelaide was met last Friday with a 35-point knockout win over Greater Western Sydney, when the Cats unveiled a new-look set-up with their talls.

For the first time this season, they played Rhys Stanley, Esava Ratugolea, Mark Blicavs, Jeremy Cameron, Gary Rohan and Hawkins in the one side, providing a balance Smith says worked well.

“It was nice that ‘Esav’ could also roll into the ruck, have a bit of an influence there. There are six talls but Jeremy Cameron and Gary Rohan are as quick as any smalls on the deck as well,” he said.

“In that sense, they are pretty tall but we also thought we had the defensive ability down forward as well to cause a bit of havoc. I think we saw, especially Gary, have two or three run-down tackles, and put a fair bit of pressure on GWS.”

Ratugolea took the defensive focus off Cameron and Hawkins up forward, while his return also meant Blicavs, the Cats’ Mr Fixit, could spend the night in defence, easing pressure there, particularly in Tom Stewart’s absence.

Smith said the absence of the injured Brandan Parfitt was a “massive” blow. Medical sub Zach Guthrie replaced Parfitt at quarter-time on Friday, while veteran Shaun Higgins or Luke Dahlhaus may now return.

The hard-running Smith enjoyed five preliminary finals with the Hawks and was lured to GMHBA Stadium last summer to be one of the final pieces for an elusive second flag under Scott.

“What I will say is that prelims are the hardest games to win. There are four very good teams left, so it’s going to be a tough game,” he said.

“There is the anxiety of winning and the opportunity of playing the next week that’s around that. They can go either way. Teams get a run on. There is always a favourite, there is always an underdog. Sometimes the favourite is not in front, the pressure increases. I have been in both positions.”

Smith has had a strong year, averaging almost 23 disposals per game, including 24 when the Cats and Demons last met.

“Certainly coming over I was hoping and thinking we should be going deep into finals, giving it a bit of a challenge,” he said.

Kerevi: Those that matter know ‘truth’ about flight behaviour

‘This club has to unite’: Bulldogs name new chair after bloodletting