Gold Coast have boosted their hopes of playing finals football after cruising to a 36-14 win over a hapless North Queensland on Sunday, the Cowboys’ ninth successive defeat.

The Titans will finish the round in seventh spot after a morale-boosting win over the Townsville side, whose coach Todd Payten made yet another bungled tactical change moving star forward Jason Taumalolo from lock to the edge.

Gifted one of the best back-row forwards in the game, Payten again showed he doesn’t know how to use him. He started the season by reducing Taumalolo’s minutes. Then he wanted Taumalolo passing the ball more instead of running with it, which had little impact. On Sunday, Payten moved him from lock to second row and the third change of the star forward was just as ineffective as the previous two.

However, to blame the poor use of the Cowboys’ biggest name would be simplistic. There were plenty of errors, poorly planned sets, abysmal finishing, lacklustre defending and little answer to a rampant Gold Coast led by fullback AJ Brimson, Ash Taylor and the rising star, halfback Toby Sexton, who put in another stirring performance in just his third career performance.

Taylor set up Gold Coast’s first try, spotting Valentine Holmes out of position at fullback and playing a short kick through to Brian Kelly to open the scoring midway through the first half. A hint of luck led to the Titans’ second. Mitch Dunn knocked down an attempted offload in a tackle and Brimson swooped on the loose ball to run through a gaping hole and make it 10-0.

Their third was nothing but brute force. David Fifita wrestled past two tackles to crash over seven minutes before the break before Tom Dearden gave the Cowboys a lifeline on the stroke of half-time. A ricochet from a kick bounced into the halfback’s path and he raced 80 minutes to trim the margin to 14-4 . 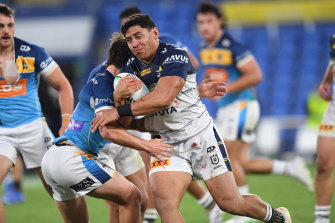 However, it did little to tilt momentum. The Titans continued their dominance and, 10 minutes after the restart, Brian Kelly crossed over for his second try to make it 20-4 after being set up by Beau Fermor. The Dalby Devils product then had a try of his own, pouncing on Sexton’s short kick midway through the second half.

Just as North Queensland looked to have been consigned to a heavy defeat, they showed some life with Holmes finishing a slick move to score underneath the posts.

However, it provided only brief respite. A cheeky grubber from Corey Thompson on the flank then a second kick inside set up Taylor to score next to the upright.

Kyle Feldt scored late for the Cowboys but the match ended with more misery. A spilled ball by centre Connelly Lemuelu metres out from the try line allowed Patrick Herbert to seal the rout with a try in the corner.

From Addo-Carr to Watene-Zelezniak: Our 2019 NRL player name audit