Manly superstar No. 1 Tom Trbojevic is back running at “95 per cent” and slated for a round-five return against the New Zealand Warriors.

While the Sea Eagles try to register their first win of the season against St George Illawarra on Friday night – and at a Wollongong venue they have not won at since 2003 – the best news their fans will hear all week is that Trbojevic is nearing his return to the field. 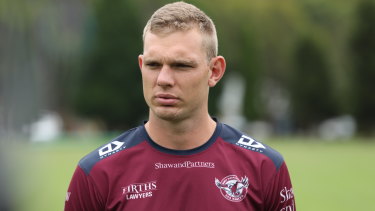 Trbojevic slipped in his bathroom a month ago and injured his good hamstring after a night out for teammate Brad Parker’s birthday. He was later forced to deny he had hurt his hamstring a night earlier after video footage emerged of him in a foot race with a punter named “Harry” down the Manly corso.

“I understand how it looks, I did some dumb stuff Saturday night, but I promise you I hurt the hammy the next morning,” Trbojevic told the Herald at the time. “I was having a few drinks and being an idiot on the Corso.” 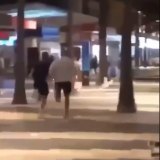 Tommy “Turbo” in the famous foot race with “Harry” down the Manly corso.

Trbojevic is no chance to play against Penrith next Thursday night, and while the Warriors game looks likely, the original plan was to bring him back into action for the round-six match against the Gold Coast Titans in Mudgee.

The Titans game is another eight days after the Warriors clash.

Trbojevic feels good in himself but Manly know rushing him back a week could be catastrophic so early in the season.

It is understood Trbojevic has not needed to consult hamstring specialist David Opar, who works at the Australian Catholic University in Melbourne and was visited by the fullback and Kieran Foran before Christmas.

Trbojevic, however, continues to follow Opar’s strict hamstring weights routine for his dodgy right hamstring, which has played a big role in limiting him to just 14 NRL games during the previous two seasons.

“It will be the week after – it won’t be next week,” coach Des Hasler said on Thursday when asked about the return of the man known as “Turbo”.

Trbojevic was able to start running a fortnight after the latest accident, and is expected to take part in his first field session early next week.

The NSW Origin and Kangaroos representative posted a photo of himself stretching out this week. Despite the surface looking bone dry, Manly insiders assured the Herald the photo was up to date.

Manly have scored just 16 points and leaked 72 in their first two matches, a defensive concern which an experienced fullback like Trbojevic could help solve.

He has done his part to help makeshift No.1 Dylan Walker who will start against the Dragons for a third straight week.

Hasler, however, was quick to throw his support behind Walker who is sure to be tested out under the high ball by Dragons halfback Ben Hunt.

“He [Walker] wasn’t the only fullback who dropped a ball last week,” Hasler said.