Manly star Tom Trbojevic will make his long-awaited return from a hamstring injury, just in time to push his claims for the second State of Origin encounter.

There are several big-name inclusions in round 13, but none bigger than the return of "Tommy Turbo". The Sea Eagles fullback hasn’t played since suffering the setback in round four, testing the depth of coach Des Hasler’s squad. His comeback will put pressure on the Blues outside backs to hold their spots for Origin II in Perth. 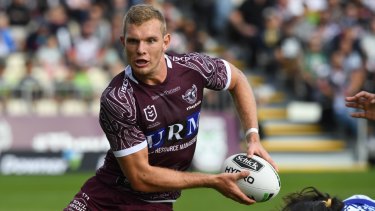 There will also be a change at fullback for St George Illawarra, with Matt Dufty coming in for Zac Lomax. Corey Norman will also make his return, while Lomax shifts to centre in a reshuffled backline that will feature Jai Field at halfback if Ben Hunt doesn’t back up from Origin.

Most club coaches have hedged their bets with their Origin contingent, either naming them in their starting sides or as part of an extended bench. One player who definitely won’t be backing up is Cronulla veteran Josh Morris, who has been rested for the Eels clash. Shaun Johnson and Wade Graham have been named in jerseys 20 and 21 respectively, potentially adding firepower to coach John Morris’ side. If Graham plays it will be his first game since rupturing his ACL nine months ago. Parramatta backrower Nathan Brown is a chance of making his own return after tearing his pectoral in round one.

Wayne Bennett has named James Roberts in the centres for the clash with Newcastle. "Jimmy the Jet" hasn’t played at NRL since he was unceremoniously dropped after round eight, but could push for a Blues return with a strong showing. Bennett has included his Origin stars in his top squad but has previously stated he will consider resting them.

Cooper Cronk returns after being rested against Newcastle and will have a new halves partner for the encounter against Penrith. Former Dragon Drew Hutchison has been named at No.6 in place of the Luke Keary (concussion). It will be Hutchison’s first NRL game since 2017. Viliame Kikau is back for the Panthers after overcoming an illness, while Wayde Egan also comes into Ivan Cleary’s side.

Andrew McCullough returns from a knee injury for the Broncos. Coach Anthony Seibold has named his full Origin contingent of Corey Oates, Matt Gillett, Payne Haas, David Fifita and Joe Ofahengaue to back up from the series opener.