BlueBet Stadium: The Penrith party did not officially start until pint-sized winger Brian To’o dived over in the corner with just five minutes remaining.

The Panthers made it seven straight wins against a spirited Newcastle, who never intended on making it an easy night for the competition front-runners. 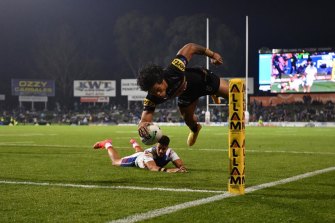 Panthers winger Brian To’o takes the aerial route to the try line to put the result beyond doubt.Credit:NRL Photos

His infectious enthusiasm and appetite for work – and cute celebratory handshakes with teammates – sum up what Penrith are all about.

Coach Ivan Cleary was proud of his players while pointing out afterwards the Knights were the latest team to try to slow down the play-the-ball.

Opposition teams trying to slow the Penrith attack had become such an issue that Cleary said he had taken the matter up with referees boss Jared Maxwell.

“We’re first in a lot of areas, yet we’re ninth or 10th with play-the-balls in less than four seconds,” Cleary said.

“I’ve seen it in a few other games, too. Tonight was another level again.

“I thought we were on top for most of the game. I thought the Knights did a really good job hanging in there and disrupting us. There were five tackle-one six-agains in the first half, so it was clearly a tactic. The play-the-balls were so slow tonight.″⁣

Penrith, who remain the only side unbeaten through seven rounds, have now gone 22 straight regular-season games without a loss.

Their popularity has quickly spread to the other side of the mountain with next Saturday’s game in Bathurst against Manly already a sellout.

Yet you would not have known Penrith were even playing during the week given the intense headlines involving Chad Townsend’s departure for North Queensland and Latrell Mitchell’s four-match dangerous contact ban.

It was so easy to forget Penrith centre Paul Momirovski, like Mitchell, was also unsuccessful at the judiciary and suspended for three games.

So strong are the Panthers right now, Momirovski might find it hard to force his way back into the starting team when he does return.

Edwards returned from a broken hand while Api Koroisau was also scheduled to return, only for stomach bug to make him wait one more week.

Stephen Crichton shifted to right centre to accommodate Edwards, while coach Cleary was happy to reward Matt Burton for his excellent form and leave him in Crichton’s preferred left-centre position.

One of Penrith’s favourite sons, Brad Fittler, said in the Nine commentary: “No wonder they’re packing the stands – they are outstanding to watch.”

Knights coach Adam O’Brien said: “If we had that type of scramble and resolve towards our defence, we’re not sitting where we are on the ladder, and we probably pick up a few games.

“At the end of the day, whenever you [concede] 24 points, it’s not flattering. But we put up a good fight tonight. We are not as polished as the opposition are [right now].”

Crichton scored first off a Cleary kick in the fifth minute, then Burton steamed on to a brilliant Luai pass as three Knights defenders only had eyes for Kikau.

Burton was also doing a top job in defence, stopping Tyson Frizell more than once in defence.

Newcastle looked dangerous when they went left and Kalyn Ponga had the ball in his hands. Kurt Mann was also classy. But their only try came about when Kikau pulled out of a tackle on Mann because he was going high, and Mann then sent Starford To’a on his way, who did well to palm off Edwards.

The Knights struggled to start their sets in good field position. The rare time they did venture up Penrith’s end of the field in the second half, they coughed up the ball.

Newcastle host the Sydney Roosters next week. They can only hope St George Illawarra bash them around on Sunday.