North Melbourne AFLW captain Emma Kearney is on track for her seventh All-Australian blazer, which would make her the only inaugural player to be named in every season’s line-up of the best of the best across the competition.

In the All-Australian squad of 42 released on Tuesday, minor premiers the Brisbane Lions had the most players selected with six, while reigning premiers Adelaide, Melbourne, Geelong and Richmond all had four players nominated. 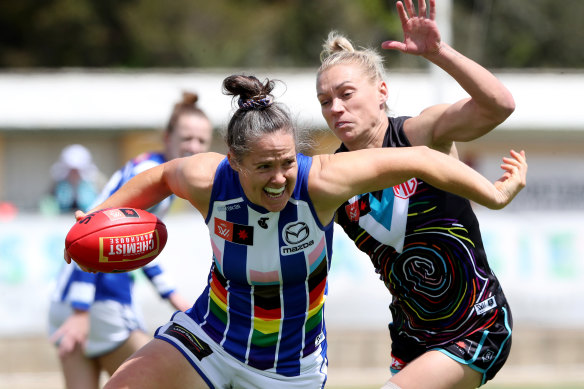 The Lions’ list included forwards Greta Bodey and Jesse Wardlaw, yet to be selected in an All-Australian side, and squad debutantes Tahlia Hickie and Breanna Koenen. Last season’s league best and fairest winner Emily Bates didn’t feature in the initial squad, nor did wingers Orla O’Dwyer or Sophie Conway.

Expansion sides Hawthorn, Port Adelaide and Sydney were the only teams to not have any representatives, while Essendon had two players in Maddy Prespakis and co-captain Bonnie Toogood. Toogood was named in season six’s squad, but if selected, this will be her first AA blazer.

In the midfield, AA squad first-timers include North Melbourne’s Jenna Bruton, Geelong’s Amy McDonald, and Western Bulldogs Katie Lynch. Bulldog Alice Edmonds was also named after a breakout year in the ruck, when she averaged 27 hitouts and 19.8 to advantage.

Richmond’s Monique Conti is in contention for what would be her fourth All-Australian selection and North Melbourne’s Jasmine Garner her fifth. However, Collingwood defender-turned-midfielder Ruby Schleicher wasn’t included, and nor was Jaimee Lambert, who both made season six’s AA side.

Adelaide’s Ebony Marinoff is also after her fifth blazer, and Anna Hatchard and captain Chelsea Randall their fourth, while Melbourne’s Karen Paxman is after her sixth blazer, missing out last season, and Tayla Harris her fifth.

A final team of 21 players, including a captain and vice-captain, will be announced at the W Awards, held on Tuesday 22 November.