Tom and Jake Trbojevic are set to sign with Manly for six more years on deals believed to be worth just shy of a combined $13 million.

The star pair are yet to put pen to paper but are expected to sign on the dotted line in the coming days. 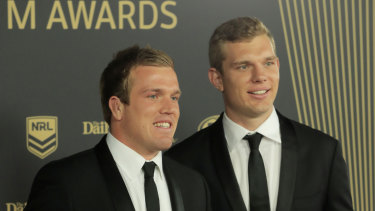 Jake (left) and Tom Trbojevic are staying at Brookvale Oval.Credit:Getty

The brothers were offered a deal worth close to a combined $13 million over six years – keeping them at the club until the end of 2026.

Tom, 23, and Jake, 25, will all but certainly remain one club players for the remainder of their careers.

Tom has been offered a deal worth just north of $1 million per year, while Jake's contract is just shy of seven figures per year.

The pair were two of the crown jewels of the 2020 free agent class, though they were never considered a genuine hope of leaving the club which they grew up supporting.