One month after Adam Treloar was traded from Collingwood to the Western Bulldogs an agreement has been reached that will see close to $1 million of the midfielder's contract carried in the Magpies' salary cap over the next five years.

Industry sources said it is unclear exactly how the Magpies will distribute the money – which amounts to an average of about $200,000 per year – across their total player payments (TPP) over the next five years but the outcome reached in the month since the trade occurred was acceptable to all parties.

The elongated negotiation process began when Collingwood disputed the Western Bulldogs' belief that the Magpies had agreed to pay $1.5 million of Treloar's $4.5 million deal that extends until 2025.

At the time the Magpies were of the view the money they were prepared to pay was dependent on them getting a higher pick than they eventually received.

In the last-minute trade Collingwood offloaded Treloar and pick 26, 33 and 42 to the Western Bulldogs for pick 14 and a future second-round selection. 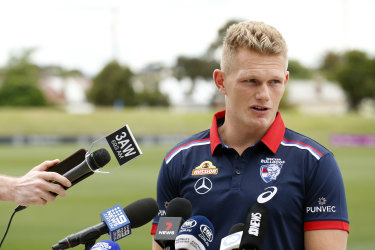 The Bulldogs have been adamant they were prepared to pay Treloar around $3 million for the five years remaining on his contract and are understood to be content with the outcome.

"You’ve got two clubs that respect each other and a player both clubs respect – he’s obviously already made a terrific contribution to Collingwood and we’ve got high expectations of as well – a deal got done in extraordinary circumstances and sensible heads will prevail and we’ll do a deal," Gordon said.

The AFL granted both clubs an extension after it became clear there was a dispute and the unusual outcome is likely to lead to a tightening of the process around trades in future.

Sources within the AFL said the league wanted to stop the possibility of such a messy outcome occurring again.

One obvious solution being considered would require both clubs to verbally indicate the exact amount being paid by each club in the future years of the traded player when the trade is finalised.

If the clubs are unable to agree to a position on that issue but the trade still proceeds the default position would be that the club accepting the player would pay their contract in full.

Collingwood are holding a members' forum on Monday night with the Magpies eventually admitting their strategy during the trade period was designed to free up cap space giving them the opportunity to trade and chase free agents and clear list spots for this year's draft.

They also have highly-rated father-son Nick Daicos set to become a Magpie in 2022.

The Bulldogs finished their off-season claiming Treloar and hanging on to Josh Dunkley while they were able to pick up No.1 pick Jamarra Ugle-Hagan as a next generation academy graduate as well as late pick Dominic Bedendo and rookie Lachie McNeil.