Western Bulldogs coach Luke Beveridge has taken aim at South Australia Health, declaring its decision to ban the team from having a short training session at the Adelaide Oval on Friday was unreasonable and comical.

As the stakes rise in a season again impacted by coronavirus protocols and border closures, the Bulldogs are due to arrive in Adelaide at about 6pm from their quarantine base in Perth, and had hoped to have a captain’s run ahead of their preliminary final against Port Adelaide on Saturday night.

Queensland Health had allowed the Dogs to have a run at the Gabba last Friday, ahead of Saturday’s clash against the Brisbane Lions – although Beveridge had a crack at the hotel staff there – but the notoriously tough SA Health, under the guidance of Professor Nicola Spurrier, has denied the Dogs’ training request.

Beveridge said on Friday all he could do was laugh at the decision.

“Usually what we do is land and go and have our last training session [but] the South Australia Health officer hasn’t allowed us to do that which isn’t ideal,” he said.

“We have almost a three-hour flight to South Australia, and then we are not allowed to stretch our legs and get moving again. We won’t be able to do that until we maybe go for a walk at lunchtime the next day. 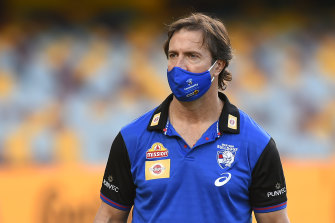 Luke Beveridge is not happy his Bulldogs have been denied a training run.Credit:Getty Images

“It’s a different preparation, a different lead-in but, like any other time, our players will just suck it up and move on and have dealt with what they can control, but that is not ideal. After we get tested again tonight, that will be our 14th COVID test in 25 days. I am pretty sure we are negative. It is a real strange one for us.”

Beveridge said the added adversity would galvanise his players.

“We just deal with it comically. The pandemic is serious, we know that, but this one is unreasonable, so all you do is laugh at it. It’s a bit like the quarantine hotel last week the way our people were treated,” he said.

“You just have to left that wry grin emerge on your face and have a little bit of a chuckle and move on. Our players, they will do that.”

The Bulldogs made three changes at selection, recalling veteran ruckman Stef Martin for Lewis Young, while Alex Keath’s hamstring strain has led to Zaine Cordy’s return. Jason Johannisen, having been the medical sub for a fortnight, replaces Cody Weightman, who is going through the 12-day concussion protocol.

Bontempelli’s right knee, injured when landing awkwardly in a marking contest last Saturday, has been a major talking point all week. He trained on Thursday, completing various drills, and Beveridge said his star captain was ready to be a key factor, warning there would be “retribution” if the Power targeted Bontempelli’s knee.