Intercept king Jake Lever says Melbourne understand how the Western Bulldogs will look to play in Saturday night’s AFL grand final in Perth and insists the Demons will have the “weapons” to respond.

The Demons, “edgy” last week but more relaxed now, began to fine-tune their analysis of the Bulldogs in a team meeting on Monday, and will intensify their focus over the remaining three days before the showpiece event. 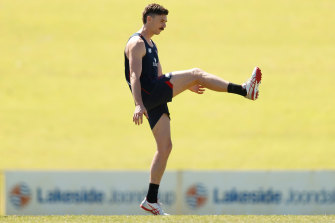 The two teams split their results this season, the Demons winning by 28 points in round 11 at Marvel Stadium, the Bulldogs responding with a 20-point win at the MCG in round 19.

Lever, the defensive sweeper, is a key to the Demons’ surge this season, and says he and his teammates have a good handle on what they can expect from a Bulldogs’ side that is now kicking the ball more rather than handballing at stoppages and has shown enormous passion and discipline to prevail through three cutthroat finals in strict quarantine.

“For us, we have played the Bulldogs three times this year, a pre-season game and two games during the year. For the players, we really know how they play,” Lever said.

“If you talk about their forward line, they have got a pretty good forward line. I think if you are the last two teams in the year to play off in the grand final, you have got some threats across the ground. For us, it’s about nullifying those but also playing our game. That’s something we haven’t shied away from all year – playing the Melbourne way. It has held up so far.”

Bulldogs forward Josh Schache had a defensive job on Aliir Aliir in the preliminary final and blunted the Port Adelaide intercept-marking specialist by making him more accountable.

The Bulldogs may ask Schache to take on that same responsibility against Lever, forcing the defender to man up, although the Demons may try to manipulate the match-ups and shift Lever to another forward – he had Cody Weightman in round 11 – in what shapes as a tactical battle between Simon Goodwin and Luke Beveridge.

Opposition coaches have tried to varying degrees to quell Lever, Steven May and rebounding half-back Christian Salem this season. The Magpies in their Queen’s Birthday clash win at the SCG and the Hawks in their draw at the MCG had success but Lever, averaging more than four intercept marks per game, the most on record by Champion Data, says the Demons do not rely solely on marking.

“We have got quite a few weapons down back. If you take away the intercept game, we become a really good ground-ball team inside defensive 50,” Lever said.

“For us, we will have a plan around that, as will the Bulldogs have around us. It’s just taking that in your stride, whether that’s a team role that you can help with … or anything like that.”

The Demons’ high pressure, particularly through the midfield – they force more than 56 turnovers per game, a league high – has also been instrumental in allowing Lever, May and Salem to flourish, but the Bulldogs are confident they have the elite kicking and handball skills to hold possession.

That the Bulldogs have also dramatically improved their clearance differential, average contested possession differential and scores from stoppages since the finals began means the Demons face an imposing task.

They will have their main training session at Optus Stadium on Wednesday.

Lever missed the Demons’ 2018 run to the preliminary final because of injury and this time does not have his wife and two young children by his side.

While he admits it has been difficult – he takes to meditation and a dip in the ocean to relax – the trade-off has been that the Demons are now in a position to end a 57-year curse.

“For myself, my wife, my two kids, the trade-off was that, I said to them before I left: ‘I won’t be coming back empty-handed if I am going to go away for that long,’” he said.

“They have been so supportive [of] me.”