While the Western Bulldogs' entire focus is Sunday's assignment against Fremantle in Cairns, forward Mitch Wallis says their confidence could count for plenty thereafter.

On the back of consecutive wins that have taken them to a 9-7 record and a top eight spot, The Bulldogs have a straightforward task against the improved Dockers in far-north Queensland: win the four points to secure a spot in the finals. Should they make it, it would be just their second final since the stunning and historic 2016 premiership. 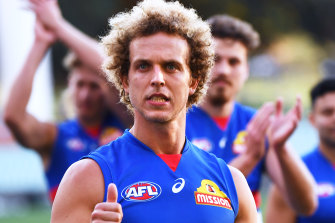 Mitch Wallis says the Bulldogs have confidence from having been in this position before.Credit:Getty Images

The 27-year-old Wallis repeated a sentiment that was expressed a few weeks ago as the Bulldogs discovered some of their best form in the latter stages of the season. Since losing to Brisbane Lions on August 8, the Doggies have dropped only one game since – an 11-point loss to Geelong.

"We've done it before," said Wallis, in reference to a question about the club's stunning run to the 2016 flag.

"We've ticked off two in a row, and we've got a few more to go, but it's within our grasp and we've done it before.

"It gives us confidence but still it's an almighty challenge."

Wallis said they would treat the match against Fremantle, who have climbed to 11th on the ladder, as a virtual elimination final.

"Because it is – it's like an elimination," he said.

"There's a few results that have gone our way, but at the end of the day we've had to win the games that we've played in.

"Fremantle are going really well. They've proven that by beating some sides in the last run towards the end of the year.

"So we're going to have to be at our best, but again it's in our control."

Wallis is also eyeing off the chance to work on his forward craft during the off-season after a fruitful 2020 that has generated 23 goals from 16 matches.

"I'm just embracing the role [as a forward]," he said.

"I've had some really good productivity down there.

"By no means am I an established forward just yet, but I think I've got the foundation to keep building on my game."

However, he doesn't know whether a forward 50 spot will be a permanent one in the Bulldogs' structure.

"I'm not sure what the future holds. I still think I can be thrown in the midfield if it comes to that," he said.

"I'm definitely looking forward to having a pre-season as a forward to really improve my craft, because as you know we haven't had much training this year to hone in on those things."

Curnow to miss two to three weeks, Watts out indefinitely