The Blues’ domination in game two of State of Origin has expunged the foul taste of the loss in Sydney, but the Maroons will be licking their lips before the decider in Brisbane.

The Perth match on Sunday changed spectacularly midway through the second half when the once-vaunted Queensland defence folded like a card table. They lost all shape, their defensive line began to fracture, players fell off tackles, large gaps opened and the Blues surged through, taking the score from 20-12 to 44-12.

The trigger for the collapse came just before half-time when the bunker awarded the Blues a penalty for an escort play, despite the referee and touch judge seeing nothing illegal in Queensland’s catch of the high kick.

Then followed a series of repeat sets against the Maroons on their line and the sin-binning of forward Felise Kaufusi. NSW scored in the final minute of the half, seizing a 14-12 lead.

Blues coach Frederick Fittler obviously knows a sin bin in Origin is near fatal. It results in an immediate try and has a compounding effect, zapping the energy of the opposition. So Fittler adopted a simple but effective second-half game plan: deprive the Maroons of possession via a high completion rate; send error-inviting spiral bombs Queensland’s way on the last tackle; change the angle of attack to exhaust them; and leave the tries to the cat-quick Panthers in the team, such as Nathan Cleary and Jarome Luai. If the “six Ps” once meant “Perfect Preparation Prevents Piss Poor Performance”, Fittler came up with nine of his own: in Perth, Pace (of the defensive line), Position (field), Possession, Pilfer (stripping the ball) and Physical Play lead to Points (especially if you have Panthers in the back line).

Queensland’s young wingers were too inexperienced at this level to defend with fewer numbers. The Maroons paid for their indecision, loose carries, problems with bombs that had more hang time than Qantas, and an inability to carry the ball out of their 20-metre zone. 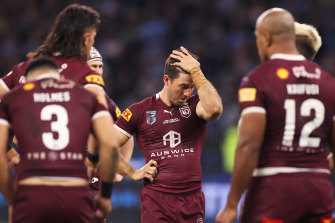 A dejected Ben Hunt after a Nathan Cleary try in Perth.Credit:Getty

So Fittler responded to the sin-binning perfectly, but so will Queensland when the decider is played in Brisbane on July 13.

The greatest weapon in the Queensland arsenal is their state-of-the-art chip on the shoulder, their entrenched need to avenge NSW insults, relish adversity and triumph over injustice.

Those three minutes before half-time, especially the sin-binning of Kaufusi, a first-half try-scorer, will be the centre of every post-mortem north of the Tweed.

“This is Origin,” the Nine commentators boomed, resurrecting the old argument that NRL rules shouldn’t apply in these fast-paced encounters. Sin-binnings are so costly the NRL must institute a distinctive alert by the referee for repeated infringements. Referee Ashley Klein warned the Maroons but it must be a signal seen by everyone – players, coaches, crowd, commentators – a clear direction that the next breach will result in a team being one man short for 10 minutes.

Six-agains are so frustratingly subjective that the NRL must act on sin-binnings the same way it treated the obstruction rule, coming down with a black and white interpretation which we understand, even if we disagree with it.

If there is no difference between Origin and NRL, the Maroons are entitled to ask how Fittler could wage a war against the referee. There was a stream of stories immediately after full-time in Origin I about the referee allowing Queensland latitude in the speed of the play-the-ball. NSW certainly tested Klein’s patience in Perth and more than matched the Maroons in the ruck. Would the NRL allow such media pressure in the lead up to an NRL club match?

This commentary should not diminish Fittler’s media campaign, or Cleary’s ability to run as fast in his mind as he does on his feet, but merely to warn how Queensland will approach the Suncorp decider.

Two years ago, they convincingly won a decider in Brisbane right after being hammered by 24 points, only eight less than the Perth result.

Everything changes quickly in Origin and the Maroons know they need experience on the wings and the return of Reuben Cotter.

NSW captain James Tedesco said the Blues’ victory on Sunday came from their “hunger”. Fittler must keep his team on starvation rations for two weeks because the Maroons have a legendary appetite for redemption.

Watch the State of Origin series exclusively live and free on Channel 9 and 9Now.