Revenge. Grand final revenge. I’m sure the Penrith Panthers marked this date down a week after the 26-20 loss to the Melbourne Storm – after they sobered up. 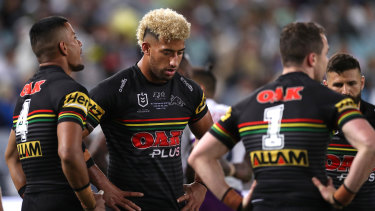 Viliame Kikau and the Panthers will be out for revenge after their heart-breaking defeat in last year’s grand final.Credit:Getty

They didn’t get the start right in the decider. Some of those players were overawed and Melbourne did it better. It would’ve been on the young Panthers’ minds all off-season.

Their bid for what Ol’ Blue Eyes was talking about – massive success – starts on Thursday night at BlueBet Stadium.

How the Panthers can win

The loss of halfback Nathan Cleary, who was ruled out on Wednesday due to concussion, is huge. He’s their game manager who does all of the kicking, all of the organising.

His replacement will be young gun Matt Burton, who will partner Jarome Luai in the halves. That means Penrith will have two dominant left-side players and two left-foot kickers.

In years gone by, that wouldn’t mean anything. But from the age of 15, players now learn how to play just one side of the field. It doesn’t make sense to me.

Penrith have started the season sensationally. They didn’t concede a single point against the Cowboys and Canterbury.

They’ve got a tough, hard-working pack and their left-side attack is the best in the comp with Luai, Viliame Kikau and Stephen Crichton.

The thing that’s really surprised me from the opening two rounds is they’ve also got the best discipline. They’ve given away just five penalties and set restarts this season. That’s incredible. 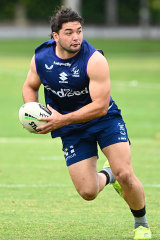 Fatigue could become a factor for Brandon Smith.Credit:Getty

I’m really interested to see how Brandon Smith plays and how he is used.

For the past two years, he’s been used in 20-minute bursts off the bench, rarely playing for the whole 80 minutes. Two really tough, physical games in the middle, defending and then having to attack, takes its toll mentally and physically.

When you’re a hooker, you’re in the game almost every second. There were times last week when he just couldn’t get into position. Nicho Hynes has been named on the bench and I expect him to play big minutes.

Beware the chip-bomb. It’s not a bomb, it’s not a chip, it’s something in between.

Cleary has been the master of this for Penrith, but expect either Burton and Luai to still use it when camped on the Storm’s line.

They will target Hughes with the Kikauosaurus – the big Fijian carnivore – or Crichton coming down on him.

The key to this kick is putting it high enough so it lands just as the chasers are getting there. If Hughes is isolated, his inside and outside men can’t get across the block for him.

Cleary is a massive loss, but I still think the Panthers will win.

The Storm are coming off really tough games and the last one against the Eels, in the wet at Bankwest, took its toll.

Penrith grind hard and the left-side attack will terrorise the Storm’s right-side defence. I can see the last 15 minutes opening up, and that will suit the Panthers.

The Toby Greene I know: a competitor with a contagious will to win