Dual Richmond premiership player Marlion Pickett faces a nervous wait to see if he is selected for the season-opener against Carlton as the reigning premiers weigh up a selection squeeze ahead of Thursday night’s MCG date with the Blues.

While some premiership teams have to contend with considerable off-season and pre-season attrition, the Tigers do not fit into that category, with only Bachar Houli (calf) unavailable from the 22 that beat Geelong on the last Saturday night of the season at the Gabba a little under five months ago. 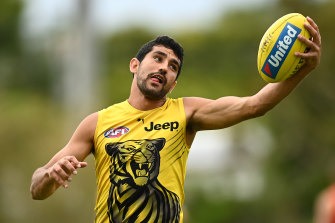 Richmond’s Marlion Pickett is vying for round one selection.Credit:Getty Images

Josh Caddy, another two-time premiership Tiger, missed selection for last year’s decider but a strong pre-season has left him in the box seat to regain his spot in Damien Hardwick’s side on the night Richmond are set to unfurl both the 2019 and 2020 premiership flags.

Pressure forward Jake Aarts, who was dropped after the Tigers’ qualifying loss to the Brisbane Lions, featured in both of Richmond’s AFL practice matches so far this season as he stakes his claim for a senior berth against the Blues.

Pickett, 29, played in the reserves when the Tigers played Melbourne last month but was back in the seniors for the narrow win against Collingwood.

But he was the sole AFL premiership player who lined up for the Tigers in their VFL practice match against Essendon on Friday, just six days before the AFL season-opener.

Despite him appearing at the lower level so late in the pre-season, sources indicated Pickett had not yet been ruled out for round one. Instead the Tigers had been keen to see him play as a defender, where he could help fill the void left by All-Australian backman Houli.

Pickett played solidly against the Dons at Tullamarine, with Hardwick watching on closely.

Fringe tall Mabior Chol also impressed in the game, while defender Derek Eggmolesse-Smith was also prominent days after securing his spot on the Tigers’ list for 2021.

Having memorably made his AFL debut in the 2019 grand final, Pickett was dropped early last season but bounced back to play 19 senior games for the season and claim a second AFL premiership medallion.

While Richmond are fighting fit, the Blues will need Jack Newnes (ankle), Levi Casboult (knee) and Harry McKay (ankle) to prove their readiness for the clash. Eddie Betts (calf) is available after missing last year’s season-opener. Zac Williams (suspension), Tom De Koning (back), Brodie Kemp (foot), Caleb Marchbank (calf), Nic Newman (knee) and Charlie Curnow (knee) are all set to miss Thursday night’s game at a half-full ’G. Mitch McGovern (back) is all but certain to miss too.

Meanwhile, Tigers captain Trent Cotchin says it is too early to judge how much of an impact the new man on the mark rule will have in 2021.

“We probably haven’t played with it enough to know how it’s going to impact,” Cotchin said.

As for the rotation limit being reduced to 75, Cotchin was optimistic the Tigers would benefit.

“It’s different for every club. I think we’ve got a pretty good endurance team, notwithstanding that I’m not one of those.”

Cotchin added that three-time Coleman medallist Jack Riewoldt remained a force to be reckoned with despite entering the twilight of his career, having turned 32 a week after the grand final.

“What I’ve loved about Jack’s game is moreso the little things that he’s doing and the way he’s getting the best out of our younger players as well. It probably isn’t spoken about from a holistic point of view, but the tap-ons, the contests, they’re all things that we value in a side. He’s doing a great job for us,” Cotchin said.