Essendon surged back into finals contention with a stunning upset win over the table-topping Western Bulldogs on Sunday, with Peter Wright producing a career-best seven-goal haul to drive them to a 13-point victory.

The Bombers had to win to stay in the top-eight race given victories earlier this weekend by the Giants, Richmond and St Kilda, all teams looking to nail one of the finals berths – and they didn’t disappoint, ending a seven-year losing run against the Bulldogs. 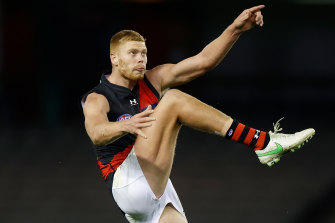 Peter Wright booted seven goals for the Bombers in their win over the Bulldogs.Credit:AFL Photos

Ben Rutten’s team showed plenty of grit and character to come back from a first-quarter mauling to kick six in the second term and keep their noses in front thereafter.

Bulldogs coach Luke Beveridge might have had a sneaky look at his Shakespeare before unleashing his team on Essendon, given the ferocity and desire with which they attacked in the first quarter.

Right from the outset the Dogs were on it against an Essendon side that for much of the first quarter struggled to get out of its own half: that the quarter-time lead was just 13 points (3.3 to 1.2) was down to some dogged defending and one profligate finishing effort from Jamarra Ugle-Hagan, who somehow contrived to hit the post from a set shot at the top of the square.

The Dogs took their cue from inspirational leader Marcus Bontempelli, whose hard-working commitment and desire matches his undoubted skill. Stepping, swerving, swivelling, Bontempelli was irresistible as he created space, drove forward and provided his attacking colleagues with opportunities inside 50. 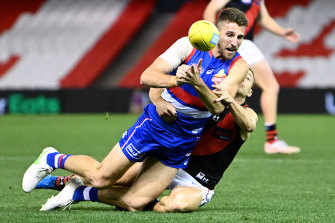 Marcus Bontempelli was again among the best for the Bulldogs.Credit:Getty Images

Although the Dogs held only a 13-point lead at the first change it was hard to see Essendon finding a way back into the game. They had been run off their legs in the opening exchanges and were clinging on – and that sentiment only grew when the Dogs kicked the first goal of the second period through Aaron Naughton.

But that was the catalyst for a massive turnround, with Essendon’s tall marking forwards making a huge impact.

First it was Aaron Francis, nabbing his second, then Wright, who was to kick three in the quarter, struck as the Bombers got on a roll – a result of their clearance work, where they were able to match the Bulldogs and get more of the ball.

When Anthony McDonald-Tipungwuti was on target with his first major, the Bombers had stretched the lead to nine points and they were taking control. 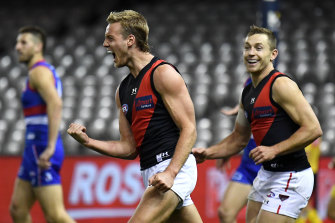 The Dogs did steady and Jason Johannisen

goaled to get them back within a kick. When Anthony Scott took a shot on goal in the dying seconds they had the chance to regain the initiative.

However he was another to spurn the opportunity, missing everything, leaving the Bombers gliding to the dressing rooms with a narrow lead.

BOMBERS SWOOPING INTO THE EIGHT?

It certainly felt that way late in the third quarter after the excellent Wright had bagged his fourth and Darcy Parish had goaled to push the lead out to a game-high 15 points for Essendon, who had well and truly put that first quarter behind them. But the Dogs only had themselves to blame in many ways, squandering a number of chances with either set shots or attempts on the run, Josh Bruce, who had scored twice in the first quarter, missing one and hitting the woodwork from another.

Even the brilliant Bontempelli was off line when he got the chance to narrow the gap. When Tim English hit the point post from an acute angle with less than a minute left it seems they were fated not to score. Man-of-the-match Wright took matters into his own hands – and boots – when he notched a sixth half-way through the final term and followed up with a seventh. There would be no coming back despite the Dogs’ later rally.

Tigers step up a gear to snap Bulldogs’ golden run