Anthony Seibold’s lawyer has issued a blunt warning to those disseminating vile rumours about his private life, declaring the Brisbane coach “wants to see it right through to the end to make sure people are prosecuted for it.”

Seibold has engaged Howden Saggers Lawyers to take action against people posting or disseminating false rumours which have gone viral. The firm’s first act will be to shut down a fake Facebook account in Seibold’s name that sprung up overnight and already has several thousand followers. 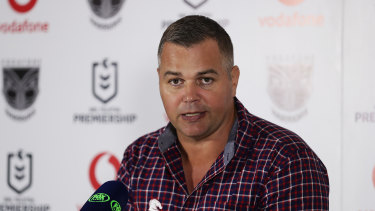 Anthony Seibold will not stand for his name being slandered.Credit:Getty

“It’s quite concerning that so much of this crap is going around. It’s very distressing for him and stuff he obviously doesn’t want to see.

“Someone overnight has even opened up a fake Facebook account in his name, so we’re going to have that taken down extremely soon.

“A lot of people just don’t understand that they are constantly committing offences by (disseminating this) online.”

Seibold is currently in COVID self-isolation for a fortnight after leaving the Brisbane bubble to deal with what the club described as a “serious family matter”. Assistant coach Peter Gentle will be in charge for Saturday night’s clash with Canberra at GIO Stadium.

Like the Seibold rumours, Saggers warned those forwarding the explicit Staggs video that they were committing a serious offence.

“Under the criminal code, you’re distributing without his consent,” Saggers said.

“He is extremely embarrassed and upset that a private interaction has gone viral.

“Obviously his family (are upset).”