My wife told me to stop the Ash Splash! But I couldn’t resist after my debut hat-trick, reveals recalled England star Chris Ashton

Chris Ashton feared he had wasted the chance to revive his England career — probably the final chance — when his latest squad recall was followed by another untimely ban.

The 31-year-old Sale wing hasn’t played for his country since June 2014, when Stuart Lancaster’s side subsided to a heavy defeat to the All Blacks on a miserable, end-of-tour night in Hamilton.

For so long, it looked as if that grim occasion would be the last act of his international career, before a hat-trick for the Barbarians against England at Twickenham in May helped convince Eddie Jones that Ashton still had plenty to offer. 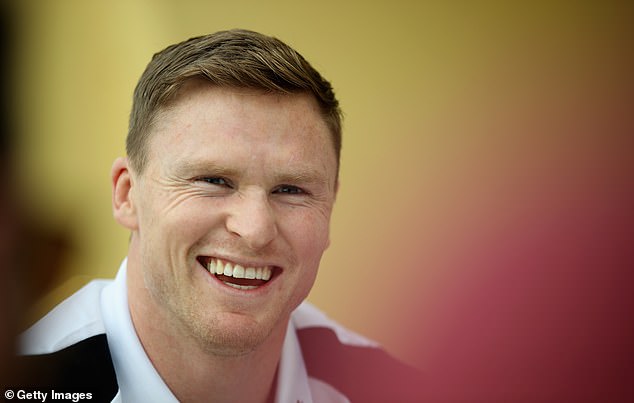 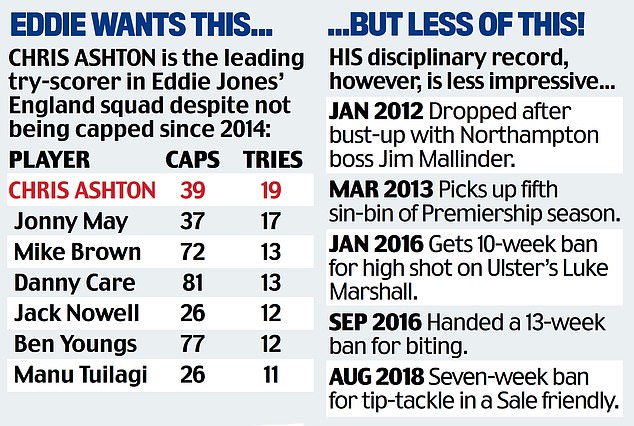 Then, just days after being brought back into the England set-up — following a summer switch from Toulon back to his native North West — Ashton was sent off for a dangerous tackle during a pre-season game for his new club against Castres.

The upshot was a seven-week ban and a shattering sense of deja vu. Once again, a disciplinary lapse left his England ambitions in the balance.

Asked if he was thinking ‘not again’ in relation to the national team and its Australian head coach, Ashton said: ‘Yeah, of course. But thankfully he was good with me all the way through, seeing how I was doing. It was nice to have that support from him and to be involved in the camps, too.’

As a statement about how emphatically he had forced his way back into favour, Ashton was included in England’s training squad in Bristol last month, while serving his suspension. But missing the start of the season did him no favours. It wasn’t the first impression he had been hoping to make, having been signed by Sale.

‘I was just embarrassed really,’ he said. ‘I was desperate to start the season well, then that happened.’ 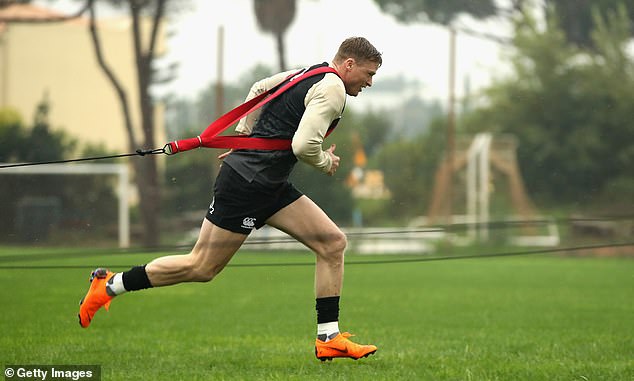 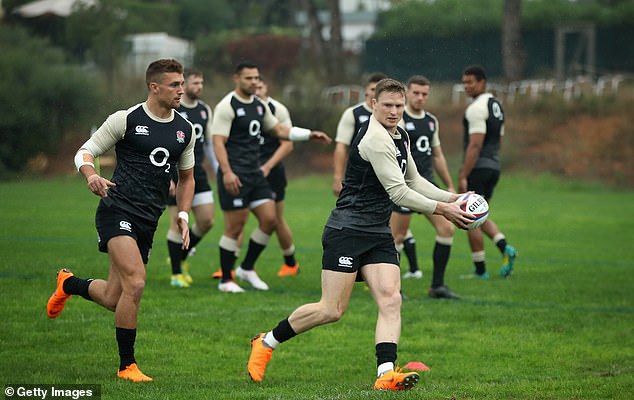 During the latter stages of his time at Saracens, there had been contentious bans for gouging and biting — charges and convictions which left a stain but were out of keeping with his jovial character.

Despite a therapeutic year of record-breaking feats in France, Ashton knows there has been reputational damage and he has to tread carefully as a result.

‘Your history carries on with you, unfortunately,’ he said. ‘I don’t know why I always seem to find myself in these tricky situations, but the disciplinary record is there and there’s nothing I can do about it.’

Reflecting on the incident in Castres, when he lost his cool in an ill-tempered fixture, he added: ‘I got drawn into doing something stupid. It was my fault. It’s down to me to not react in that sort of situation.

‘It’s not like I’ve not had enough experience of these things. It was a very lively game. There were a lot of fights, none of which I was involved in, then I’m involved for two seconds and bang — it’s my fault! I have to be more aware of my surroundings and the situation I’m in.’

He has emerged from the episode in fine style. Last weekend, Ashton marked his belated competitive debut for Sale Sharks with a hat-trick against Connacht.

‘It couldn’t have gone much better,’ he said. ‘I felt good.’ 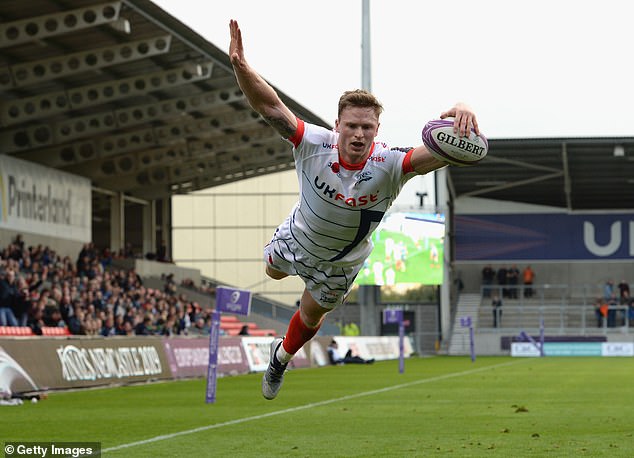 He sealed his treble with a trademark Ash Splash — a high-dive finish in the right corner. It turns out that he was nagged to do it by his team-mates.

‘I was getting a bit of stick off the lads,’ he said. ‘I just did it because they were complaining, but my missus has told me to put a stop to that!’

What happened to Freddie Burns earlier this month should serve as a cautionary tale to Ashton, as the Bath fly-half paid for prematurely celebrating a try when Toulouse full back Maxime Medard knocked the ball from his hand behind the posts.

‘Poor Freddie,’ said Ashton. ‘I felt so bad for him. Just put it down over the line, that’s what you do, isn’t it?’

When it was pointed out that he had splashed down for Sale just days ago, he added: ‘Yeah, that wasn’t the plan either. We’ll see.’

Ashton is here in the Algarve preparing for England’s Quilter Tests, starting with South Africa at Twickenham next Saturday. He has the nervous energy of a rookie.

‘I feel like it’s my first time again,’ he said. He hopes to thrive on his return to Test level due to gradual maturity and his stint at Toulon. 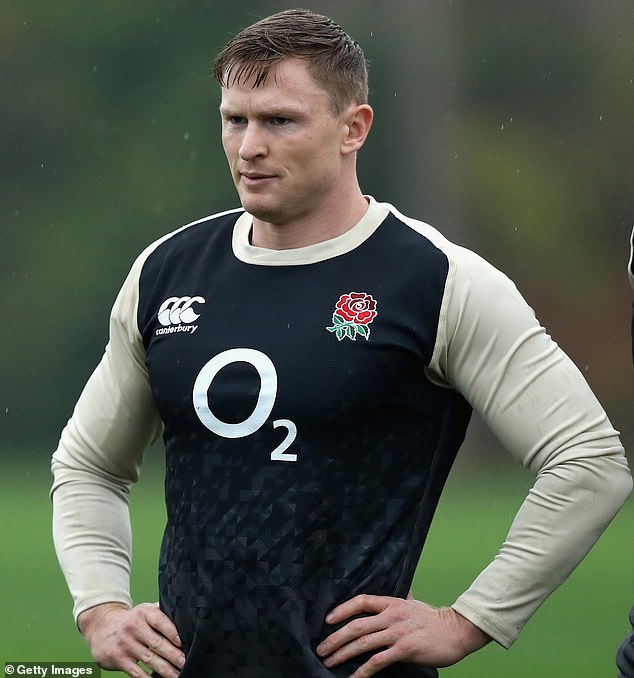 ‘It really refreshed me and helped me restore some confidence,’ he said. ‘It also made me feel that I wanted to come back and play for England again. I’ve missed being involved in Test match rugby. I was watching England play so well and wanted to be part of that.’

The renowned finisher now has a prime opportunity to finish his England career on a high, rather looking back on that last Test appearance with regret.

Asked to recall the game in Hamilton which ended New Zealand 36 England 13, Ashton said: ‘We got battered. I’ve tried to forget it. I’d never be happy to finish with that as my last cap for England. I’d like to move on to another one.’

His wish is likely to be granted — if not next week then certainly during the next month.

England utility back Alex Lozowski remains in danger of being unavailable for the match against South Africa, as a disciplinary hearing on Friday night ruled that he should face fresh charges relating to Saracens’ recent Heineken Champions Cup fixture in Glasgow.

While Lozowski successfully appealed against a ban for dangerously entering a ruck, he will now face a charge of making a dangerous tackle.