Joe Marler has proclaimed slurs against opponents’ parents is “the norm” in rugby after breaking his silence over his ban for calling Jake Heenan’s sick mother a “f—— wh–e”.

The Harlequins prop also told listeners on his personal podcast that his “sledging” was “usually better” than the insult that sparked a mass brawl in his side’s Premiership defeat to Bristol last week. 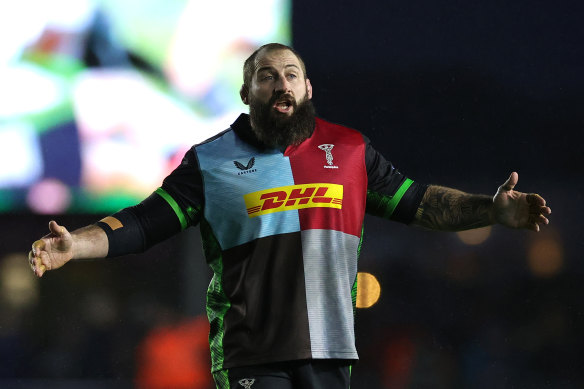 Joe Marler has been banned for six weeks, four of them suspended.Credit:Getty

Marler, who the Rugby Football Union banned for six weeks, four of them suspended, said he had “absolutely no idea” Heenan’s mother was in hospital before twice calling her a “wh—“.

He said: “I’ve f—-d it all up again. I’m really sorry to Jake Heenan and his family, the guy I insulted or tried to insult, and also to my teammates, and to the club, because they must really now be at a point where they’re like, ‘Here we go again’.

Branding himself “a bit of a helmet”, he continued: “At what point do you go, ‘Yeah, you can say sorry, mate, but just stop f—-ing doing it’? I guess this is the point, is it?”

He added: “I’m much better at that when it comes to a bit of chat or a bit of sledging. I’m usually better than just calling someone’s mum a wh–e.

‘My wife turned round to me after and she was like,‘F—ing hell, you’re an idiot, aren’t you? You’re just a moron.’

“Usually, stuff like this is said. This is the norm. Now that may not be an excuse but is kind of a bit of a reason that you go, ‘Well, it’s the norm, it’s normalised’.”

‘Why don’t you just stop doing it?’

Marler declared he had “absolutely no idea” Heenan’s mother was in hospital before revealing even his own wife, Daisy, had refused to defend his behaviour. 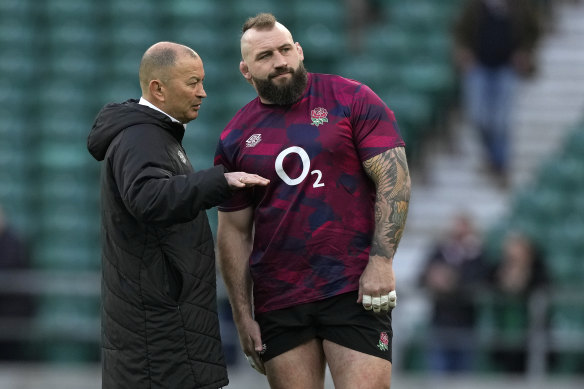 The latest ban for Marler, pictured with former England coach Eddie Jones, is set to impact his chances of a Six Nations recall.Credit:AP

“And then when I said, ‘Apparently, his mum’s in hospital’, she went, ‘F—ing hell. You couldn’t even double down even worse’. She went, ‘Why don’t you just stop doing it? Or, if you feel the need to do it, just don’t bring family members into it. You never know what’s going on in people’s lives and just because it doesn’t affect you on the pitch doesn’t mean it’s not going to affect other people. Just f—ing get on with it’. And I was sitting there like, ‘Oh my God, that naughty schoolboy at the back of the thing’.

Marler has become notorious for winding up opponents, something he branded “fake tough-guy s—” borne of insecurity about his own ability.

He added: “I’ve been back and forth about the whole situation, of, ‘Oh, it goes on all the time; you should hear some of the stuff’. All this lot. ‘What’s the big thing, and would there be a hoo-ha if his mum wasn’t in hospital?’ Probably not.

“But, actually, we always have a choice, don’t we? We have a choice whether you can actually use this for good, regardless of what the RFU have done in terms of banning or setting an example. It’s about what can I do to make this be useful and good for me moving forward. And I guess it is a realisation that I haven’t got long actually being able to play the game left. So I want to use whatever time I have left at the club to actually embrace it and play the game.”

Watch every game of the Six Nations live on the Home of Rugby, Stan Sport. Sign up for your free seven-day trial now.

Stuart McInally to captain Scotland but no place for Huw Jones

McCall will be 'amazed' if Saracens trio aren't in England squad