If Danny Cipriani thought his week could not possibly get any worse having been omitted from Eddie Jones’ England squad, he got a rude awakening on Saturday.

The Gloucester outside-half’s contribution was always likely to go a long way to deciding the outcome in Limerick but he trudged off the pitch with less than 30 minutes on the clock.

His high tackle on Rory Scannell, reviewed extensively by referee Alexandre Ruiz before Cipriani was red carded, ensured that a bad week ended on another low point. 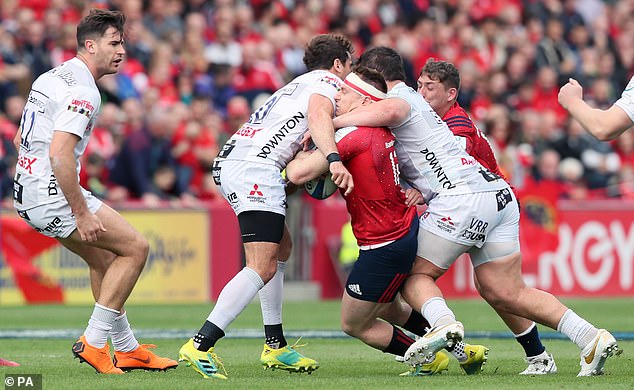 Cipriani got sent off for a shoulder barge, thanks to the new zero tolerance on high tackles 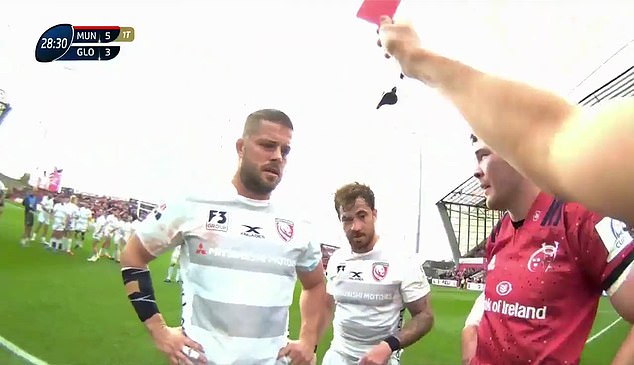 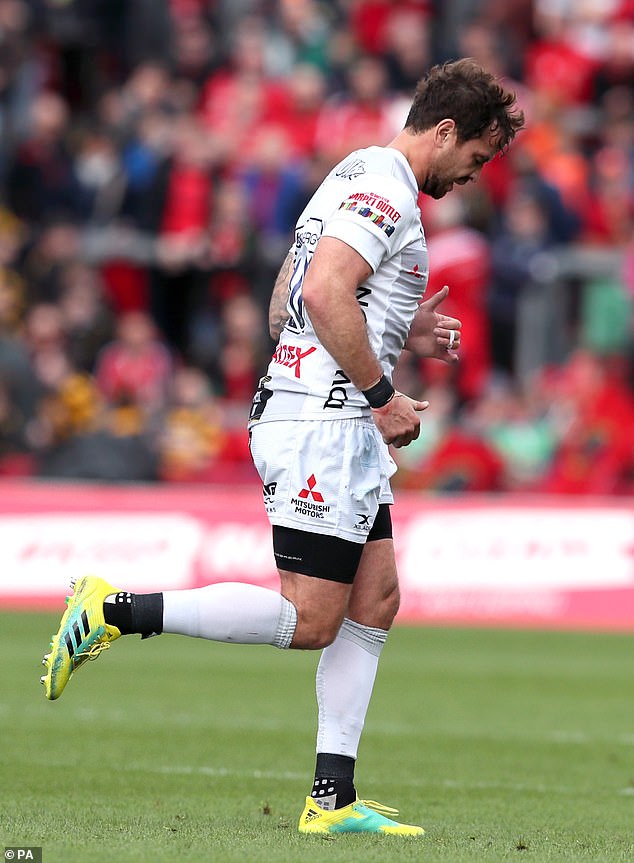 Cipriani jogged off the pitch, just days after being left out of Eddie Jones’ latest England squad

Danny Cipriani has been sent off ?

He knew straight away he was going to be shown red for this tackle.

He apologised on his way off but his week has gone from bad to worse… pic.twitter.com/XGga2MHz2P

Cipriani had travelled to Ireland with a point to prove following his England snub. The Premiership Player of the Month for September started brightly in the Limerick sunshine, playing with intent and kicking a good penalty.

But it would all go wrong and Gloucester head coach Johann Ackermann said: ‘I’ve got a lot to say but I’m not going to say it. It’s not going to change anything.

‘Danny is disappointed. If they come and watch how he trains, that’s how he protects himself. He didn’t even want to tackle the guy.’

Ackermann was also frustrated with the consistency in relation to the high tackle, with centre Billy Twelvetrees seeing a similar reviewed incident go unpunished.

But by the time the visitors lost Cipriani, Munster had already taken control of this Pool 2 clash, with full-back Mike Haley dotting down on the 20-minute mark after the province had spent the early exchanges absorbing pressure.

Cipriani’s opposite number Joey Carbery, in his first European start at Thomond Park, dragged his first shot wide with the conversion. 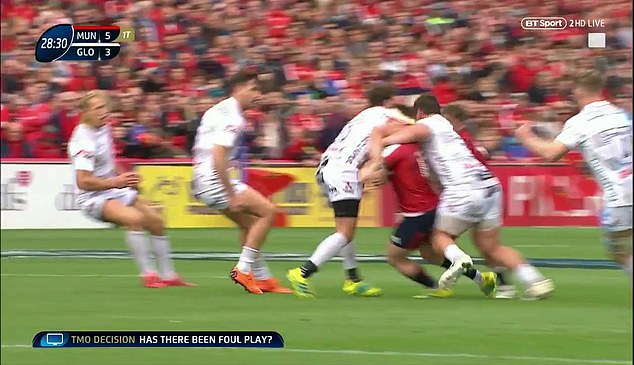 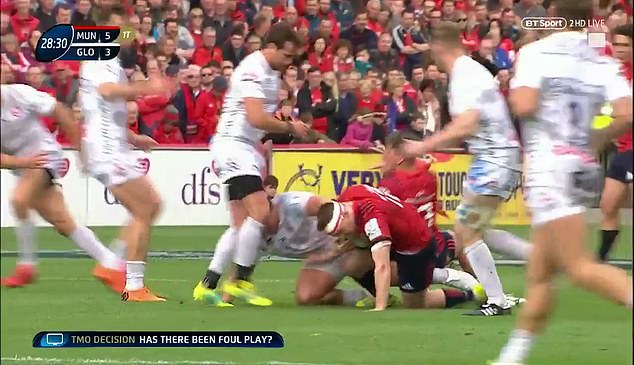 There wasn’t much contact, and Scannell wasn’t injured, but the red card was within the rules 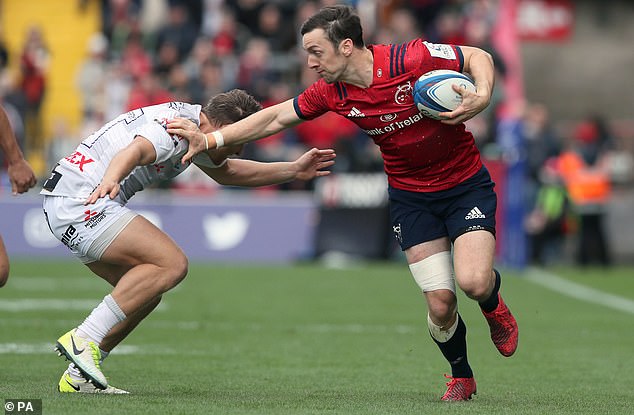 The sending off came early on, and Gloucester struggled and finally lost 36-22 to Munster 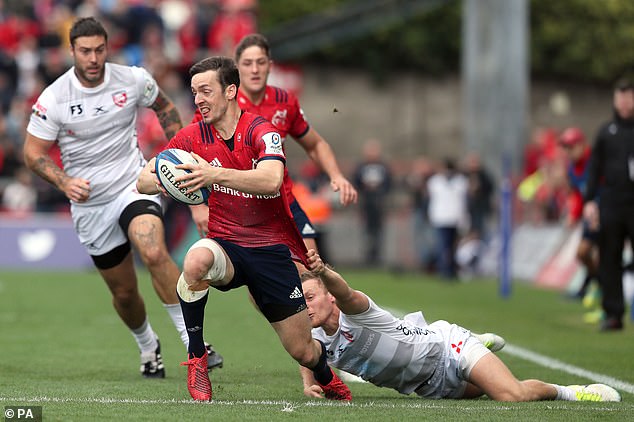 He soon found his rhythm, though, producing magical moments in the second half and capping it with a well-taken try. Rhys Marshall charged over from a maul as Munster went in 15-3 at the break.

The bonus point soon arrived and again Carbery was the catalyst, producing a deft behind-the-back pass to keep the move alive before Sammy Arnold finished.

Gloucester refused to lie down and scored three tries without ever looking likely to turn it around.Andrew Conway added a fifth try for Munster.

Another sending off for a high tackle could not help Exeter against Castres in France as the visitors blew a 14-0 lead to lose 29-25 in Pool 2. Maama Vaipulu walked before the break. 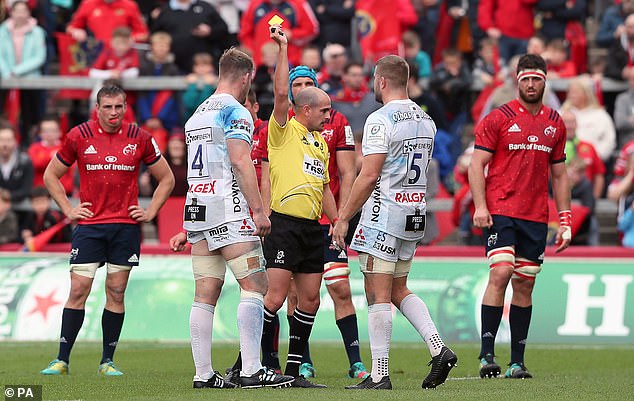 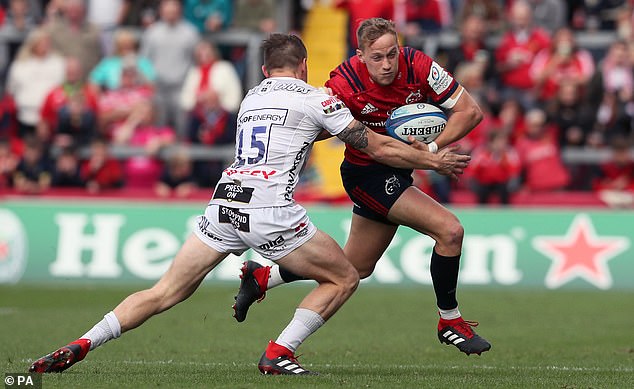 Stuart McInally to captain Scotland but no place for Huw Jones

Bledisloe Cup 2020 LIVE: Can the Wallabies salvage some pride against the All Blacks?