Can the two Australians named in the unofficial Super Rugby Pacific Team of the Championship even play together?

Well, of course they can. But will they?

Wallabies coach Dave Rennie clearly has no qualms about using the Brumbies’ Rob Valetini and Queensland’s Harry Wilson in tandem but is that how he is seeing his back row shaping up for the immensely physical battle against England that awaits Australia in Perth on July 2?

The international rugby website Rugbypass was being harsh but fair when it named 13 Kiwis in its team, but the flipside was that this shone the spotlight on the importance of Valetini and Wilson to their respective franchises. The Reds have already formalised that by presenting Wilson with the Stan Pilecki Medal for the peer-voted best player of the season while Valetini is well in line for his second successive Brett Robinson Award when the Brumbies hold their big night following the England series.

It is difficult in the extreme to build a case NOT to use both Valetini and Wilson in the starting side against Eddie Jones’ men. But here goes…

Valetini has become the tip of the spear as far as the Wallabies’ attack is concerned, carrying fearlessly into the thick of the defence. Wilson, too, is a dynamic ball-runner but of a different variety. He was left home from the Wallabies’ spring tour last November to work on his footwork and did so well in that regard that he was the only forward in the top 10 for metres carried (1036m) in Super Rugby. Add to that a season in which he finished in the top 10 for tackles and offloads and his value becomes all too apparent. 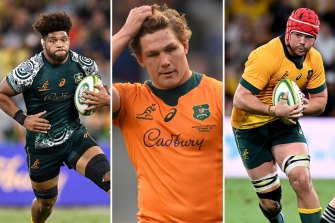 But is Australia overloading too much in the one area?

Rennie has been Wallabies coach for 20 Tests yet he has used Wilson for only 10 of them, so he clearly has some reservations about him. Valetini, on the other hand, has been a regular, capped 18 times by Rennie and looking like becoming one of the constants in the back row alongside openside flanker and captain Michael Hooper.

Rob Leota of the Melbourne Rebels is the incumbent Test No.6, having taken advantage of Wilson’s absence on the spring tour to make his international debut. He is arguably a superior lineout jumper but his major asset is the physicality he brings to blindside flanker. With an injured Lachie Swinton reduced to a spectator throughout the Waratahs’ season and forced out of the selection mix, Leota could be the man to make an impression. Still, he too had an injury-affected campaign and can the Wallabies be confident of getting the same workload out of him?

The other alternative is to use Jed Holloway at six. The Waratahs veteran has demonstrated throughout his career that he is just as capable in the second row as in the loose-head role, which stamps him as an ideal reserve. Yet there is a headiness about his play, a pure rugby intelligence, which would make it very tempting for Rennie to set him free against England. 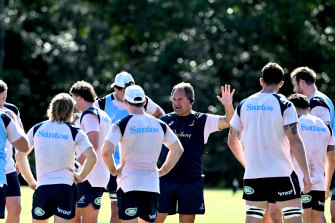 Dave Rennie is about to take charge of his 21st match for the Wallabies.Credit:Getty

Yet, from the coach’s perspective, the recurring question is: Who can dent the white line? It is highly unlikely that Taniela Tupou will start on July 2 and maybe not later in the series either. That narrows the field dramatically in the ball-carrying stakes, though loose-head Angus Bell is showing great promise in that direction.

Matt Philip is a direct runner but he tends to go to ground with the ball while the other likely lock, Darcy Swain, looks wonderful whenever he breaks loose on one of his trademark giraffe-like runs but his main value is in the lineout, both in attack and defence.

After weighing up all his options, Rennie may find himself back at the very beginning. In his first Test as Wallabies coach, in October 2020, he selected a back row of Valetini, Hooper and Wilson against the All Blacks in Wellington and deserved to get far more reward than a mere 16-all draw. Valetini was at No.8 that day and Wilson at six but a positional swap now would certainly be in order.

The Wallabies have a chance to firm up at least one long-term unit combination in this series. The tight five, the halves and the back three all look to be in a state of flux. With the possible exception of the centre pairing of Samu Kerevi and Len Ikitau, only the back row has the potential to be unchanged for the World Cup.

That’s not to say it’s a closed shop. Aside from the contenders already listed, Rennie will also have to consider how he uses such youngsters as Fraser McReight and Tom Hooper in the mix.

But there is a formidable look about the Wilson-Hooper-Valetini unit. Perhaps not as menacing as Toutai Kefu, Dave Wilson and Matt Cockbain, the last back-row combination to win a World Cup for Australia. But who’s to say?

Watch every match of the July Test Series on the Home of Rugby, Stan Sport. Kicks off Saturday, July 2 with Wallabies v England, New Zealand v Ireland, South Africa v Wales and Argentina v Scotland. All streaming ad-free, live and on demand only on Stan Sport.