This was as rusty as you see from Exeter and Rob Baxter said the paucity of the Chiefs’ performance was entirely down to disruption caused by the cruelties of Covid-19.

A coronavirus outbreak at the Chiefs meant the men from Sandy Park were unable to face Toulouse in their Heineken Champions Cup clash and suffered an automatic 28-0 defeat. It also resulted in a longer-than-expected Christmas break ahead of the Boxing Day clash with the Cherry and Whites.

Director of rugby Baxter admitted it was hardly ideal preparation and so it proved. Still, the defending champions did maintain their perfect record with a fourth straight bonus-point success. 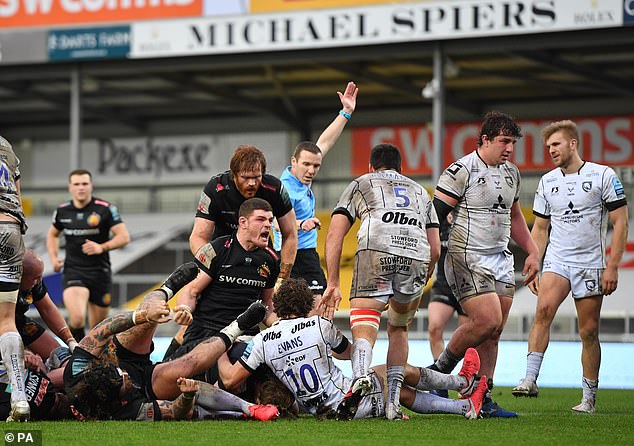 A rusty, Covid-hit Exeter found a way to win against Gloucester in 28-20 victory at Sandy Park

It came despite the Chiefs being nowhere near their best – particularly in the first half. Exeter’s tries came from Jonny Gray, Ollie Devoto and a Sam Simmonds brace and the worrying thing for the rest of the division is they still recorded five points even with a less-than-ideal build-up.

Asked how much of a part Covid-19 had played in his team’s poor start, Exeter director of rugby Baxter said: ‘I think pretty much all of it. The squad which played had never trained together before the game. It wasn’t a great performance or an amazing game of rugby. We talked about not getting too disappointed with mistakes and when we really had to dig in and score tries, we did.

‘Everyone fronted up with a difficult amount of preparation time.’

Gloucester fly-half Lloyd Evans missed with his first chance at opening the scoring, but was more successful with his second shot. George Skivington’s side had already driven over the line once only for a try to be ruled out by referee Tom Foley’s TMO David Rose.

Exeter were not all at sea, but their rust having had a week off was clear and centre Ian Whitten was yellow carded for a deliberate knock on.

The visitors were causing plenty of disruption, but they were also unable to pull further clear than just a penalty despite their early dominance.

Exeter finally woke up with a man down. Captain Joe Simmonds went to the corner and although the try didn’t arrive initially, it was only a matter of time before it did.

Evans’ second penalty with the last kick of the first-half made it a one-point game at the interval. 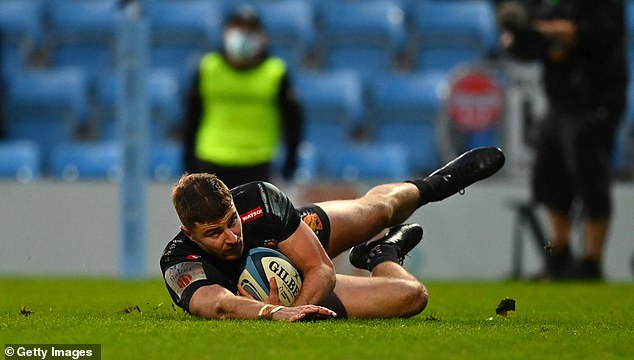 After Hogg limped off, his team had the chance to clear and end the first half.

But scrum-half Jack Maunder was charged down, Gloucester earned a shot at goal, and Evans didn’t miss. Joe Simmonds looked like he’d crossed for a second Exeter try on the resumption, but he spilled the ball with the line gaping. Exeter’s second nonetheless arrived soon enough.

Joe Simmonds’ fine pass found Whitten and it was another outstanding short ball from the fly-half which sent Devoto over. He also kicked the goal.

Baxter had clearly given his team a deserved half-time rocket. Sam Simmonds was driven over for their third from another powerful line-out drive and all of a sudden the Chiefs were on a roll.

Joe Simmonds converted and the search was now on for the bonus point. At the other end heroic Exeter defence stopped a try for Ollie Thorley as Gloucester butchered a huge overlap. 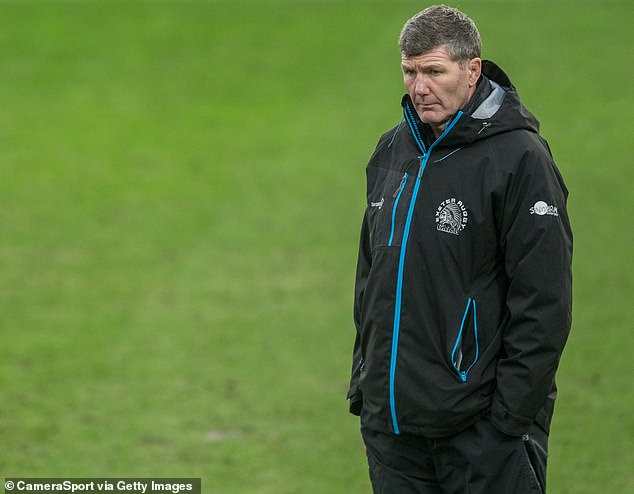 They did get one back through replacement scrum-half Toby Venner after neat back-line play in midfield from Mark Atkinson and although Evans converted, Gloucester still had too much to do.

Exeter’s crucial fourth try arrived when Sam Simmonds went over for his second close-range effort of the day and his brother Joe completed things from the tee.

There was still time for another late Gloucester consolation from Premiership debutant Venner, but Evans missed the chance for a losing bonus point with the game’s final kick.

Gloucester head coach Skivington said: ‘The fact the boys are gutted shows a lot. We scored two tries here which hasn’t been done for a while and it could have been more.

‘Exeter were always going to come back into the game and it just wasn’t quite enough.’