Exeter 35-12 Northampton: Luke Cowan-Dickie stars for the Chiefs as his two tries lead Rob Baxter’s side to victory against the Saints… while Sam Simmonds, Olly Woodburn and Henry Slade also score tries for the home side

The Devon sky above Sandy Park was tinged with an unusual hue of pink before kick-off.

Northampton and touch judge John Meredith were the ones left red-faced with embarrassment come the final whistle. Exeter were comfortable winners, dominating from first to last although they did lose two-try captain Luke Cowan-Dickie to a right ankle injury. New England head coach Steve Borthwick will now be sweating on the fitness of Cowan-Dickie for the Six Nations.

‘Luke has rolled his ankle. For it to get him off the pitch it must be pretty sore,’ said Exeter head coach Ali Hepher, whose team bounced back impressively from a humbling by Saracens. ‘Tactically, we were superb. That was the reaction we wanted.’ 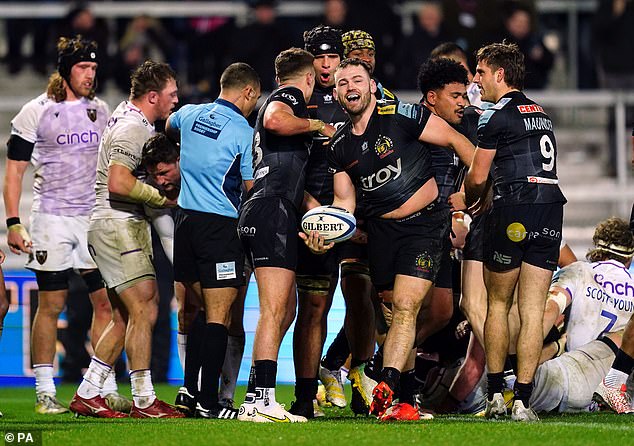 Exeter fly to South Africa on Sunday, for Saturday’s Champions Cup clash with the Bulls. They will make late calls on whether Cowan-Dickie and Stuart Hogg, who is struggling with a heel problem, will travel to Pretoria. Temperatures there are expected to touch 35 degrees.

The contrast with a British January could not be more different, but Exeter will head into unusual climes buoyed by the most convincing of successes.

With England pair Cowan-Dickie and Sam Simmonds back in their side after injury, the hosts bullied Northampton who never got going. Cowan-Dickie and Simmonds will both leave Exeter for French champions Montpellier for next season. They showed here how badly they will be missed.

Both players scored, but Cowan-Dickie limped off after his brace after being tackled from behind by Alex Coles. His injury and an underwhelming home crowd were the only negatives for Exeter as they showed Northampton how much work they still have to do to trouble the league’s best.

Exeter were immediately ahead, the returning Simmonds crossing from close range. The home side’s second came following a long, painful period of kicking.

Saints full-back Tommy Freeman blinked first and tried to run the ball back, but he was swarmed by black shirts who turned the ball over and Olly Woodburn pounced for his 50th Premiership try. 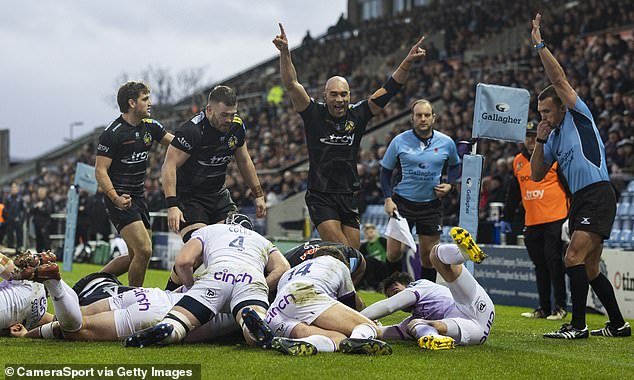 Northampton were overpowered up front and lost crucial line-outs.

It was one-way traffic, only stopped by a brief moment of comedy when Meredith tweaked a calf and had to be replaced on the sidelines.

Cowan-Dickie and Simmonds led the Exeter charge forward. Their third came from their captain after Solomone Kata was taken out in the air. Cowan-Dickie was never going to be stopped.

Referee Adam Leal went down at the start of the second half after being accidently stepped on by Northampton prop Alex Waller. This time the official stayed on and immediately awarded Cowan-Dickie his second. Fraser Dingwall did at least put Northampton on the board.

Freeman left the field for a head injury assessment and missed yet another Saints line-out go awry. 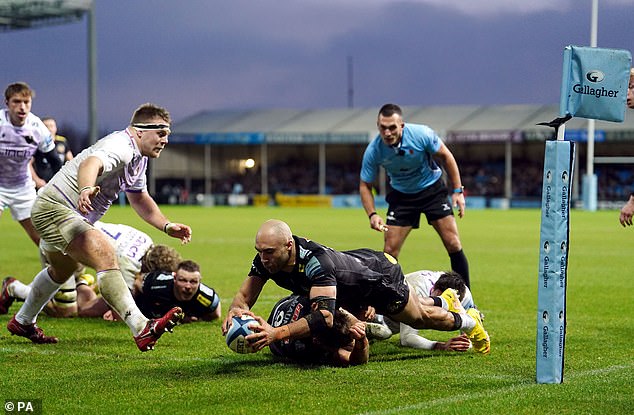 It soon got even worse for them. Effectively a man up with Cowan-Dickie hobbling around lame, Saints scrum-half Alex Mitchell threw a pass straight to Henry Slade who galloped over for Exeter’s fifth. Matt Proctor grabbed a Northampton consolation, but this was a much-needed bonus-point win for Exeter in their bid to trouble the play-off spots.

The presence of Cowan-Dickie on the bench at the end was promising.

Northampton director of rugby Phil Dowson hopes to have England flanker Courtney Lawes back for their trip to Munster but saw his team fail to back-up a big win over Harlequins.

‘We were so poor in so many areas and inaccurate. We didn’t get it right and we need to work out why. We showed some bits, but it was too little, too late,’ Dowson said.

‘We were really good last weekend, and we were fairly inaccurate and poor this. We didn’t lack energy or effort, there were just lots of mistakes.’ 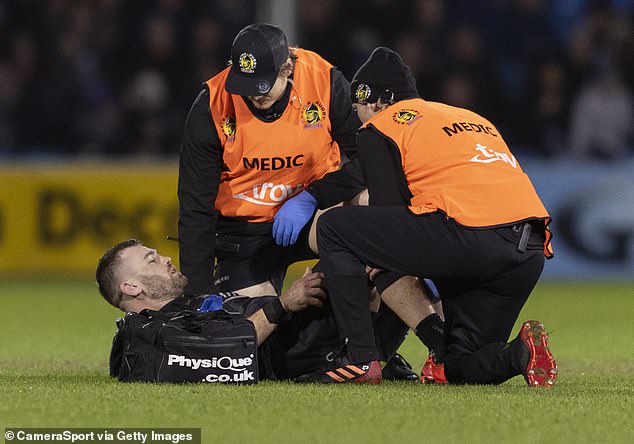