Cardiff: The Wallabies are trying to navigate a full-blown injury crisis ahead of a final spring tour match against Wales after Michael Hooper became the seventh player to be sidelined as a result of last week’s loss to Ireland.

Australia’s extraordinary run of injuries has worsened in Cardiff, with the Wallabies confirming Hooper will fly back to Sydney on Thursday due to a concussion he picked up in the three-point loss in Dublin. It is unclear when in the match Hooper suffered the knock.

Hooper informed Wallabies staff earlier this week he didn’t feel up to playing and was immediately scratched from the clash in Cardiff on Saturday (Sunday morning AEDT).

It comes just a few months after Hooper took an extended break from the game due to “mindset issues”.

He has featured in three of Australia’s four matches on this tour and was one of the team’s most influential players in Dublin.

It’s another major loss for the Wallabies, who are edging closer to the possibility of not being able to field a full team of 23 players if further injuries strike before the weekend. 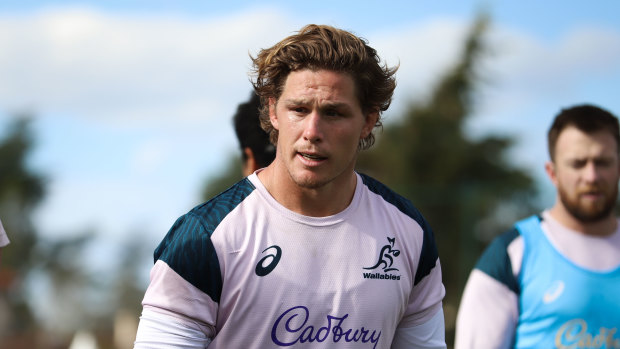 The Wallabies were decimated by injury against Ireland in the penultimate match of their tour, with Taniela Tupou (ankle), Rob Valetini (ankle), Andrew Kellaway (foot), Hunter Paisami (knee), Nic White (concussion), Dave Porecki (concussion) and now Hooper are all set to miss a must-win Test against Wales.

Australia have an even greater selection headache this week given overseas-based stars No.10 Bernard Foley and second-rower Will Skelton are unavailable because the match falls outside the international window.

Last month, Rennie announced a squad of 36 players to tour Europe. Now, he only has 25 at his disposal.

So dire is Australia’s predicament that the Wallabies do not have a single spare back on tour. All 10 will have to play this week — seven starters and three on the bench — assuming Rennie goes with a conventional split of five forwards and three backs on the pine.

Centres: Reece Hodge and Jordan Petaia (can also both play in the back three), Len Ikitau

The Wallabies are unable to call in Australian players from European club teams because most have matches this weekend.

Someone like Irae Simone, the former Brumbies centre who has three Wallabies caps, would have been perfect to cover the loss of Lalakai Foketi and Paisami in the midfield but won’t get a release from his French club.

The Wallabies are only carrying two halfbacks (Jake Gordon and Tate McDermott) plus two hookers (Folau Fainga’a and Lachlan Lonergan), which are very much specialist positions.

Hooper’s absence paves the way for Fraser McReight or Pete Samu to step up to the No.7 role in a match where the Wallabies will be attempting to snap a three-match losing streak against Wales.

Jake Gordon appears to be the frontrunner to replace White in the starting side, while Jordan Petaia could step up in Kellaway’s absence after a favourable showing against Ireland that featured a nice try.

Had so many injuries occurred during an earlier match in the tour, the Wallabies would have brought in replacements from Australia.

But, with one game remaining, they are limping to the finish line of a draining year when injuries have become all too frequent.

The Wallabies maintain the injuries are simply a case of bad luck.

Adding to the side’s woes is the pressure of aiming to avoid a record 10th loss in a calendar year, something which has never happened before.

“We need wins,” said back-rower Jed Holloway. “We’re so close, that’s what’s driving the boys to finish this tour off the way we want to.

“We know as a group we’re right there. We’re taking the right steps to put in a good performance.”

Watch all the action from the Wallabies Spring Tour with every match streaming ad-free, live and on demand on Stan Sport.