Michael Hooper is poised to become Australia’s most capped Wallabies skipper of all-time this weekend and coach Dave Rennie says he wouldn’t be surprised to see him go past George Gregan on the all-time list of Test match appearances because of his resilience.

Rennie says he is “gobsmacked” by pundits who question Hooper’s on-field capabilities and believes it is a byproduct of the team’s poor winning record rather than his individual performances. 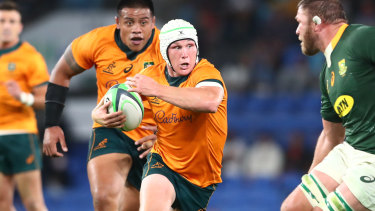 Tough as they come … Michael Hooper wore headgear against South Africa after suffering a head wound in a recent Test against New Zealand.Credit:Getty

Barring a late injury, Hooper will lead the Wallabies out for the 60th time this Saturday against South Africa and go past Gregan (59 Tests) as the country’s most decorated skipper.

Last week’s 28-26 victory against the Springboks, the reigning world champions, will be hard to top but if there is a player who deserves success in a milestone match, it is Hooper.

The New South Welshman first captained Australia in 2014 at age 22. From 59 Tests in charge, Hooper’s record is 23 victories, six draws and 30 losses.

If he can remain fit, Hooper could potentially surpass Gregan’s record by the 2023 Rugby World Cup in France.

“That would be no surprise,” Rennie said on Thursday. “He’s so resilient. Even the other day against the All Blacks … Brodie Retallick splits him open and he gets 20-odd stitches. He puts [headgear] on and jumps back out there and gives you the same intensity. Based on the resilience, you’d imagine he’d play a lot more Tests.”

The Wallabies certainly haven’t enjoyed sustained success in recent years, which is why Rennie thinks criticism of Hooper is misplaced.

“If people query his ability to play, I’m gobsmacked about that,” Rennie said. “You talk to players around the world and he’s hugely respected. People’s opinions are often reflected on the success of the team and he’s been the captain. Because the team loses and he’s the skipper, that responsibility is on him. 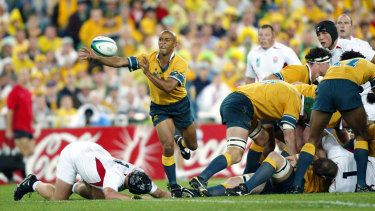 “He’s a Wallaby great. If he was playing in a different era when you had a team full of very experienced and seasoned players and you’re dominating the world, he’d go down as one of the best players in the world and one of the greats.”

Rennie has coached hundreds of players over more than two decades and feels one thing stands out when it comes to Hooper.

“I’m not sure I’ve coached anyone who trains full on like he does and plays full on,” Rennie said. “It’s a hell of an achievement.

“His form has been incredible. You see it time and time again; the amount of collisions, his ability to link and ability to show desperation and make key tackles … he’s a fantastic example to the rest of the group.”