Australia’s dream of hosting the 2027 Rugby World Cup began four years ago at London’s Royal Garden Hotel in Kensington on a day shrouded in controversy.

When World Rugby chairman Bill Beamount walked to a lectern in front of hundreds of rugby officials and reporters, he was expected to confirm South Africa as hosts of the 2023 Rugby World Cup. 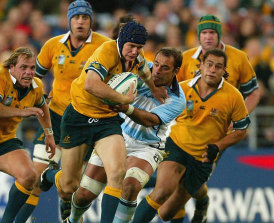 South Africa had been recommended as the preferred candidate to France and Ireland following an independent evaluation report. But in the 16 days that ensued, France went on the offensive, convincing voting unions behind closed doors they had more financial clout than the other bidders.

Oblivious to the drama set to unfold, Australian Rugby Union officials had done their homework and decided that 2039 might be the country’s next chance to host a World Cup.

So, 2039 it was, until Beaumont revealed France had swooped and pinched an unlikely victory.

Outgoing ARU chief executive Bill Pulver and deputy chairman Brett Robinson were in London at the time and knew the wheels needed to get in motion if Australia wanted to be best placed for 2027.

The likelihood of four straight northern hemisphere hosts was unlikely.

The board agreed, and now, barring a huge U-turn from World Rugby which announced on Thursday Australia is the preferred candidate, Australia will host the World Cup in 2027.

Unlike 2017’s controversial decision, World Rugby’s process has changed significantly, thanks to some gentle pressure applied by RA.

RA now has five months of targeted and “exclusive” dialogue with World Rugby to work out the finer details of the tournament, before signing a vote by the World Rugby Council in May next year.

When the International Olympic Committee announced earlier this year Brisbane were “preferred candidates” to host the 2032 Games, RA hoped it could receive a similar guarantee from World Rugby.

Of all the people who might know a thing or two on how to make that happen, RA had one influential figure in their corner: IOC vice-president John Coates.

RA sought counsel from Coates, who was added onto the team’s World Cup advisory board, one that was set up about a month after chairman Hamish McLennan began the role in May 2020.

With a board that also featured former prime minister John Howard and former governor-general Sir Peter Cosgrove, World Rugby knew Australia was truly serious about 2027. It worked a treat.

As one RA official told the Herald: “McLennan wanted to take the bull by the horns”.

At the Tokyo Olympics, Coates met with World Rugby officials, notably new CEO Alan Gilpin, and assured him that a process of appointing a preferred candidate was worth replicating.

“He’s been really good with engaging with World Rugby at the Olympics,” said RA chief executive Andy Marinos of Coates. “He played quite a pivotal role there in his own environment explaining the process they went through for 2032. [He was] trying to steer World Rugby down this path. His level of influence across the sporting landscape was pretty extensive and he certainly knows which levers to pull at which stage for us.”

Executive director of Australia’s bid, former Wallabies captain Phil Kearns, was one for hyperbole on Thursday, describing Coates as “one of the smartest blokes that’s ever lived”.

Make no mistake, this was a team effort. McLennan, Marinos and Kearns were critical, but so too were bid executive Anthony French and bid advisory board chairman Sir Rod Eddington in getting an auspicious result for Australian rugby when it perhaps has never needed it more.

Two days of face-to-face meetings in London with World Rugby officials were “absolutely critical”, according to Kearns.

“When you’re doing stuff via Zoom, sometimes the exact right message doesn’t get through,” Kearns said. “When you’re face to face, you can clear all those things out and move them with some calm negotiation. Some [meetings] were more formal and some of them were over dinner where you get the real information.”

Marinos added: “We had a two-day workshop where they really knew the proposal on the table. When I jumped on the plane on Sunday night, I was confident I was going to get through.”

Another critical factor was state and government support. RA secretly flew a number of state and federal government officials – mostly from tourism bodies – to Japan for the 2019 World Cup to give them a taste of what an event of such magnitude could do for Australia.

At the Australian embassy in Tokyo, RA workshopped ideas, sold its World Cup vision and explained to stakeholders why there would be huge economic benefits.

RA will unlock more government support now it has the backing of World Rugby.

As McLennan posed for a celebratory photo at London’s luxurious Conrad Hotel on Monday (UK time), Marinos and Kearns, both jet-lagged, found out the good news soon after.

“I woke up at 2am and saw the messages on my phone,” Marinos said. “It’s hugely exciting. That’s one of the reasons why I took this job on.”

Kearns added: “Being still jet-lagged I woke up at quarter past 12 last night and checked my phone and there was a message saying we’d got it. I haven’t slept a lot since. We’ve all been texting each other … we’re really excited.

“We’re 90 or 95 per cent of the way there. We’re in the 75th minute of the game and we’re leading and we don’t want to let it go. That focus is really important over the next five months.”