Flying Fijian excitement machine Semi Radradra says he hasn't spent a moment thinking about rugby league despite rumours he is cooking up a return to the NRL two years after he left the Eels.

On the eve of Fiji's opening World Cup match against the Wallabies, in which the enigmatic Radradra will team up on the wing with wrecking ball Sevens gold medallist Josua Tuisova, the former Parramatta star told the Herald he did not miss the 13-man code. 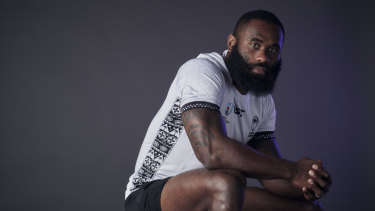 Fijian flyer Semi Radradra has eyes only for the job at hand at the Rugby World Cup.Credit:Getty Images

"Not really, not at all," Radradra said.

"I haven't talked to anyone [about returning to rugby league], I've just told my agent to manage my off-field business. I am just focusing on footy, playing good footy every week. I have to focus on the game [on Saturday] and the rest of the World Cup."

The self-described utility back has been linked to a sensational switch to rival Sydney club the Bulldogs, but was in no mood to talk about rugby league in Sapporo less than 24 hours before he donned the Fijian white and black to try to take down the Wallabies.

He has spent the past two months in camp with the Fijian team, a luxury rarely afforded to teams from the Pacific Islands, whose players are usually spread around the world in professional competitions.

"I’ve been enjoying every moment. The first time I wore a white jersey for Fiji it was a privilege and honour. I am really enjoying it at the moment."

The circumstances of Radradra's departure from the Eels in 2017 were painted as a last-resort move at the time as the winger fought three-year-old domestic violence allegations that were later dropped at the prosecution's request. The painful episode cost Radradra the chance to don the Kangaroos jersey against New Zealand that year, despite being cleared of all assault charges.

But the 27-year-old said his two years in France had been some of the best in his life and that he had always held a candle for the Flying Fijians.

"I went to France and played over there to see a different environment and a different language. Everything has changed and for me and I was fortunate."

He started with Toulon before moving to Bordeaux and was picked up quickly by Fiji Test coach John McKee. In six Tests over the past 12 months he scored three tries, including one in the team's watershed victory against France in Paris last November.

Radradra will be hoping for a different outcome to the last time he represented Fiji against Australia. In the 2013 Rugby League World Cup the Fiji Bati were pumped 64-0 by the Kangaroos at Wembley Stadium.

"To play such a big tier-one team it will really give us that level of experience so hopefully we’ll give them a good game."

He will start on the wing at Sapporo Dome in a tactical switch from McKee, who has only used him at outside-centre to date.

Radradra was taking it in his stride, excited about the chance to take on a roaming brief in a rock-star back line.

"For me I’m a utility back, I started on the wing and moved to the centres. I think we have our own game plan, that is why [McKee made the change].

"For me to play on the wing was a privilege for me, I’m excited to try something new, especially against Australia."