Argentina's historic win against the All Blacks at Bankwest Stadium on Saturday has put the Wallabies in the box seat to lift their first piece of major silverware since 2015. It has triggered an influx of ticket sales in the past 48 hours. 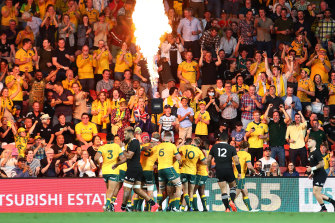 The Wallabies celebrating their victory in Brisbane.Credit:Getty

Saturday's clash with the Pumas at Newcastle's McDonald Jones Stadium, which is permitted to be filled to 50 per cent capacity, is very close to a sellout. Rugby Australia believes both the New Zealand-Argentina rematch next weekend and the likely Australia-Argentina decider at Bankwest on December 5 will have their full allocations exhausted, too.

An increase in capacity, even to 75 per cent, would be worth hundreds of thousands to RA's bottom line. Clarke called for Berejiklian to match Queensland Premier Annastacia Palaszczuk, who has allowed 52,500 Queenslanders to fill Suncorp Stadium for Wednesday's State of Origin decider.

In comparison, ANZ Stadium was only half full for last Wednesday's second Origin clash and the NRL grand final was played in front of just under 40,000 fans.

Given there has been no community transmission in NSW in 10 days, Clarke believes the time has come to open up stadiums to more fans.

I can't see why we can't have more fans at games.

"The government has done a tremendous job of controlling the virus in this state and, if the situation remains under control, I can't see why we can't have more fans at games," Clarke told the Herald.

"We'd love 100 per cent but we'd certainly take 75 per cent. If Queensland can do it [for the Origin decider], we should be able to match it. Why can't we?"

Clarke believes the likelihood that the December 5 clash between Australia and Argentina will decide who takes home the Tri Nations trophy has led thousands of fans to Ticketek.

"I think the increase is in part due to the [Wallabies'] result in Brisbane [against the All Blacks] but also due to Argentina's performance on Saturday," Clarke said.

"The Argentinians are passionate and they want to support their team – especially now, when they're almost certainly going to see a live final match of the tournament."

'It's a strange league. There are games you go into thinking, 'I need to play well here or I might not have a job'