All Blacks star Beauden Barrett has revealed he is receiving “golden” advice from Eddie Jones at Japanese side Suntory Sungoliath after England’s joint-worst finish to a Six Nations campaign.

Just days after escaping censure from the Rugby Football Union after a debrief into the nation’s Six Nations slump, England coach Jones flew to Japan and started working with Suntory, who are in the Top League play-offs. Although the RFU said he had its blessing to work there as a “consultant”, it is understood the Australian acts as Suntory’s director of rugby and that he led a double training session on Tuesday. 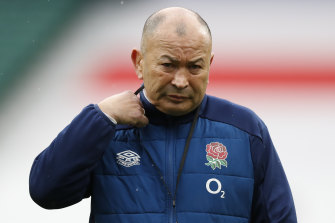 That means Barrett as well as Australian breakaway Sean McMahon and several leading Japan players, who will face England in the group stage of the 2023 World Cup, are directly benefiting from Jones’ hands-on coaching. According to Barrett, that advice is “going to help make me a much better player.” It is understood Jones was granted dispensation to travel to Japan, despite COVID-19 restrictions.

Jones was also working with Suntory in January, immediately before England’s ill-fated Six Nations campaign, which will raise further questions as to how he can continue to balance his role as the highest paid coach in world rugby with his outside commitments.

“Eddie has had a little bit to do with Suntory rugby and he’s been so good for me with my dealings with him,” Barrett, a two-time World Rugby Player of the Year, said. “When he does have something to tell me, they are like little pieces of gold. His understanding of the game is exceptional.

“He’s been involved a fair bit, certainly at the start of the season. He was over in January for a couple of weeks and he is over now. He spends a lot of time with the coaches but also runs some training and some drills. When he is here, he is always around giving players’ feedback whether on the field in instant feedback or whether after training when we are having lunch. He is very valuable when he is here.

“He’s in all day. If you walk past him, there’s always a rugby conversation whether it’s feedback or whether it is what about this or do you see that. He is like that with all the players. He certainly has a wealth of knowledge. He has been around and understands rugby and genuinely knows that he is great for Suntory and in his advisory role is to the coaches and players.”

The RFU has repeated its claim from December, when England were drawn in the same World Cup pool as Japan, that there is no conflict of interest between Jones’ commitments with his role as England head coach, although it was not clear whether they were aware of the extent of Jones’ hands-on involvement. As well as working for Suntory, whom he has an association with for more than 20 years, Jones also has a consultancy role for the American team San Diego Legion.

An RFU spokesperson said: “Eddie has had a consultancy agreement with Suntory for over 20 years. We have been aware and comfortable with that since he joined the RFU. He provides consultancy in his holidays and this role is in no way a conflict with his England team priorities.”

Alan Quinlan: 'Renaissance of French giants has been impressive but today we will find out where they really stand'