The man behind the successful 2003 Rugby World Cup in Australia believes Sydney should not only reprise its role as host for the 2027 Rugby World Cup final, but for both semi-finals as well.

And John O’Neill, the former ARU chief executive, says the current Rugby Australia administration should lock away its financial windfall from the tournament in an independently run foundation, to prevent the money being squandered.

O’Neill, who oversaw the bid and roll out of the 2003 tournament, said the chance to repeat the widely acclaimed tournament – where the Wallabies famously lost in extra time to England – was a wonderful moment for Australian rugby.

“It is one of the once-in-a-generation opportunities and 24 years since the last one, you just have to grab it with both hands and both qualitatively and quantitatively make it one of the great events to remember,” O’Neill told the Herald.

“For rugby union, operating in such an incredibly cluttered market with AFL and NRL and football and all competing codes, it (a World Cup) is one of the really unique points of differentiation. Rugby just has a wonderful point of difference. 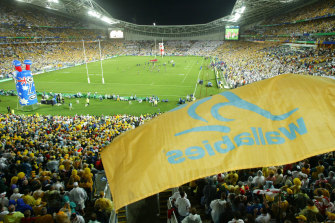 A packed Stadium Australia for the 2003 Rugby World Cup final between the Wallabies and England.Credit:FIONA-LEE QUIMBY

“In 2003, we created a new template which basically every World Cup since then has followed, where one country has hosted it and we played in 11 cities and used 12 venues, so the incredible opportunity to spread the gospel across this country is just there for the taking. And 24 years later we have venues that are considerably better. We are going to be spoiled for choice.

“2003 was an event to remember and people still talk about it, which is nice. But 24 years later, there is absolutely no reason in the world why 2027 can’t be better.” 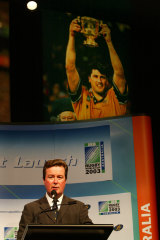 The location of the 2027 Rugby World Cup finals will be a big talking point in coming months, with Perth, Melbourne and Sydney the cities vying to host the decider.

World Rugby’s decision will be driven by a combination of stadium facilities and money on offer from the state governments.

O’Neill said he believed the model introduced in 2003, where Sydney hosted the semi-finals, the bronze play-off and the final, should remain. The 2023 Rugby World Cup in France will play all four at Stade de France in Paris, and O’Neill believes Accor Stadium in Sydney should get the nod as Australia’s prize rugby venue.

“That’s the crescendo, after six weeks you end up in one destination,” O’Neill said. “In ’03, we had two quarters in Melbourne and two quarters at Suncorp, and then we moved to Sydney. And it was a terrific model.

“Those last two weeks in Sydney were phenomenal, and that’s where you get all the atmospherics. You couldn’t move down at the Rocks, at the Opera House, all over Sydney, the live events. I still unashamedly favour Sydney but it will be for others to judge.

“That’s a negotiation to be had, and Hamish (McLennan) and others are well-equipped to do that. But in terms of economic benefit, for the NSW government, that’s money-can’t-buy stuff. 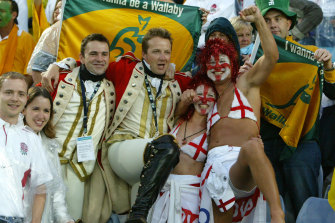 ”The great thing about a rugby audience, from interstate and international, is they’re big spenders. They’re disposable income is significant, and to have them filling hotels, bars and restaurants in Sydney [is a huge benefit]. There were stories (in 2003) about sport stores selling out of golf clubs.”

The 2003 Rugby World Cup generated a profit of $45 million for the ARU but it is part of Australian rugby folklore that the ‘war chest’ was swiftly drained, via dispensations to states and the cost of the Australian Rugby Championship.

O’Neill, who left the ARU to run the-then Football Federation Australia in 2004, said he would urge Rugby Australia to lock away the financial windfall this time, invest it and use the dividends to fund the grassroots – but would prohibit any of the money being used at the professional end of the game.

“I am not going to criticise anyone from those days, but what I attempted to set up in 03-04 was what John Coates had done off the back of the Sydney Olympics,” O’Neill said.

“They had a $99 million dollar war chest, which they locked up in a foundation and that foundation now is $250m or some huge amount. They had a board of trustees, very smart people who invested the money wisely and they haven’t distributed any of the capital, they only distribute the income.

“The idea back in 03-04 was we would lock up the $45m and whatever income we made would be distributed to grassroots rugby. It’s what I call rainy day money. Entities like the ARU are not-for-profit entities and their ability to raise capital is very rare. A once-in-a-generation event like Rugby World Cup 27, they can raise real capital. If you start writing cheques, $10m here, $10m there, it can disappear.

Cian Tracey: 'Munster's attacking game can only be judged when first-choice backline is fit'