Dublin: Ireland coach Andy Farrell rued his side’s inability to take what few chances they had in Sunday’s (Monday AEDT) 15-13 loss to France and said their game management needs to improve if they are to salvage anything from this year’s Six Nations.

France were deserved winners in Dublin but only after the hosts failed to turn their first-quarter dominance into more than three points and conceded the first try of the game when their opponents had a player in the sin bin. 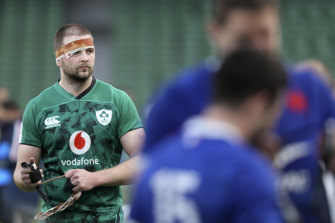 “A couple of days ago people were writing us off, we never wrote ourselves off but it’s one that’s slipped away from us in the end,” Farrell said, referring to the triple injury blow to captain Johnny Sexton, halfback Conor Murray and lock James Ryan after their opening defeat to Wales.

“We’ll rue a few decisions that we made … I thought we managed the first half pretty well, I thought the third quarter (of the half) we just lost our way a little bit in terms of game management and I suppose that got them back in the game.”

“His words carry a lot of weight,” Henderson said. 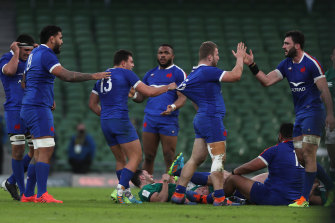 France, who will host the next Rugby World Cup in 2023, have won nine from 11 under coach Fabien Galthie.Credit:Getty

But Ireland have been struggling to create chances in recent games and make their possession count, something they need to put right against Italy in Rome in two weeks.

“Ultimately we’ve got three games left, our backs are against the wall and we have to pull out performances, for not only the next game but the next three games,” Henderson said.

“We’re definitely seeing progress, everyone’s trying their best to produce that progress on the pitch but I think it’s that last couple of inches, we just need to push it over the line.”

A Bernard Le Roux yellow card for a trip after 23 minutes gave the hosts a chance to make their pressure count but while winger James Lowe was a trailing boot away from doing just that in the corner, it was the 14 men who scored the first try.

Just as they did in the explosive 50-10 win in their opener against Italy, French backs and forwards alike offloaded brilliantly when they finally got ball in hand, culminating in Ollivon’s try, although Jamison Gibson-Park gifted him the opportunity by unnecessarily stepping in to tackle.

France took control as the Irish fell away and with Antoine Dupont again pulling the strings superbly at nine, there looked only one outcome when Damian Penaud added a second try in the 55th minute.

But an immediate, opportunistic reply out of nowhere from replacement Ronan Kelleher helped drag Ireland back to within two points with 15 minutes to go as they eyed a famous comeback win without the injured trio.

France, who host the 2023 World Cup, top the standings with nine points, ahead of Wales on goal difference with England in third place three points adrift.

“We were prepared to win the game, we won the game. It was our objective. That’s it,” coach Fabien Galthie, who has led France to nine victories in 11 games said.

“We have a lot of ambition, for all our games. We were ready to face the Irish. It’s interesting to tick the boxes. Each game is not a goal in itself, we have bigger goals. I think the team will continue to improve.”