A defiant Rob Penney has refuted former NSW prop Tom Robertson’s view that the Waratahs have off-field issues and made it clear he believes something special is brewing within the team.

Two weeks out from the Super Rugby AU season, Penney is under more pressure than any other head coach at the five Australian franchises following an underwhelming 2020 that yielded one win from six starts in Super Rugby before four victories from eight matches in Super Rugby AU. 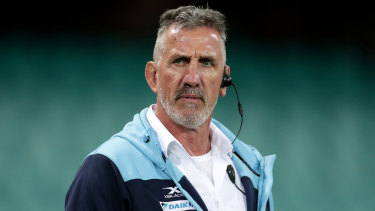 Penney is optimistic heading into his second year in charge. Credit:Getty

Penney, heading into his second season, is slightly surprised by criticism of last year’s performances given “what I was inheriting”, and sent a reminder that rebuilding the Waratahs after a dismal 2019 under Daryl Gibson was always going to take time.

Waratahs fans are some of the most fickle in Australian sport and may be slightly more buoyed about the season’s prospects after Friday’s 45-33 trial victory over the Queensland Reds.

Penney rated aspects of the victory A+, while others a C-, with inconsistency to be expected at this time of year.

But reports of an unsettled playing group, rumours of a rift between he and outgoing general manager of rugby Tim Rapp, and speculation he came within a whisker of getting the sack last year do not sit well with Penney.

In particular, comments made by Robertson, who left the Waratahs for an opportunity at the Western Force.

In an interview with ESPN, another recently departed Waratah, Jed Holloway, said Robertson was “speaking the truth”.

“People see life through their own lens and everyone has a perspective,” Penney said. “Sometimes a molehill can become a mountain.

“We would have a different view on a few of those things. I can categorically say that as much as we love Tom, it hasn’t affected the rest of the group here. It’s a really good vibe, but I encourage you to talk to the boys about it. Don’t sit back and worry about asking the question because I’m really confident you’re going to get a positive response. 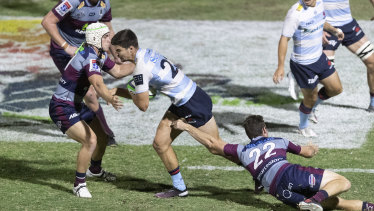 NSW’s Jack Maddocks takes the ball into the Queensland defence during their trial match in Narrabri on Friday night.Credit:Getty

“I think the morale is really good. I think a lot of good work has been done by a lot of good people. With the management team now having a campaign under our belt and the players all spending good quality time in our pre-season and the back end of last year, I think it’s a positive start.”

The Waratahs play last year’s finalists, the Queensland Reds and ACT Brumbies, in their first two matches of the 2021 season, set to kick off on February 19. Even with the tough opening, Penney can’t comprehend why the Waratahs are being written off before a ball has been kicked.

“It’s [improvement] on the way, if I can hang in here another year,” Penney said. “Rotations of personnel take time. We’ve got a bloody good group this year and I’m unbelievably privileged to be part of the coaching group and I reckon we’re really close. This group can do great things.

“When I arrived last year in December, the questions were: What are you going to do? You’ve lost all the Wallabies, how are you going to go? My answer was always it’s a project. I don’t know why it was such a surprise why we struggled early in the campaign, because you guys [the media] knew what I was inheriting. Hopefully you can see the glimpses of what the future looks like.

“I tend to have the glass-half-full [approach], but I believe this group can kick on, which is so exciting for Australian rugby and the Waratahs. There will be bumps in the road and the other sides are good as well.

“We’re certainly not claiming that [underdog] position. If other people put us there, it’s irrelevant to us. We’ve got a good group, they’re a year on and there are no excuses.”

Highlights from Narrabri included the Waratahs’ ability to shift the ball quickly, the distribution of No.10 Will Harrison, an overall improved kicking game and a solid scrum.

The team will have a weekend off before travelling to Brisbane for round one against the Reds.

'We want to see fluidity in our all-round game'