NO try celebrations, NO ice baths and NO injured players on the sidelines… Premiership Rugby take drastic measures in a bid to curb spread of coronavirus in the sport after Northampton-Leicester became fifth match of the season to be called off

Try celebrations and ice baths are now banned in Premiership Rugby as the league attempts to curb the spread of Covid having had to cancel another game.

The East Midlands derby between Northampton and Leicester became the fifth match of the season to be called off after positive cases at Saints.

It means three rounds in a row have now been hit by coronavirus. 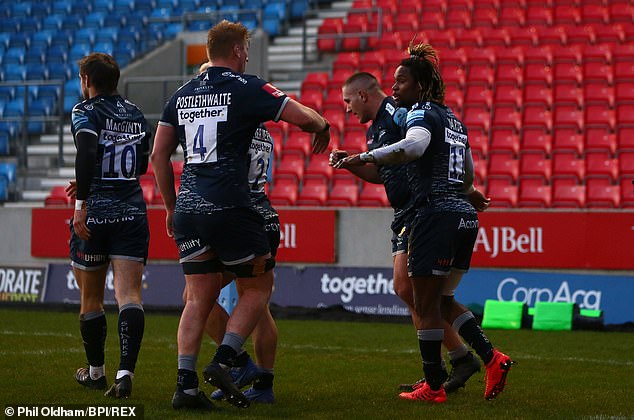 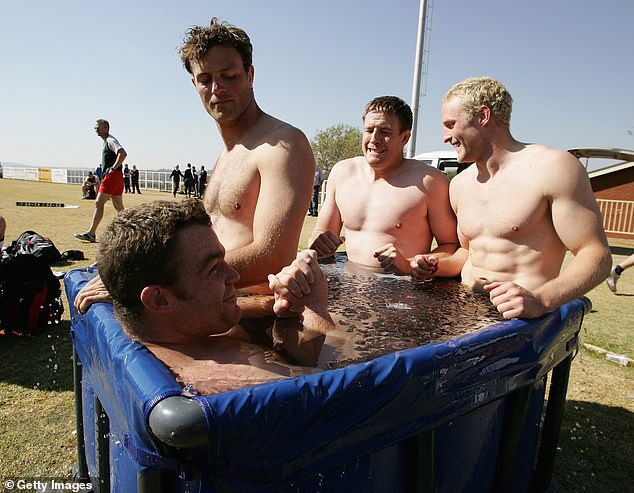 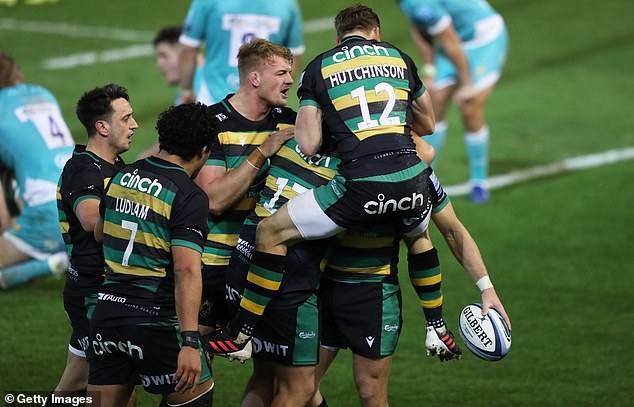 Northampton’s training ground will now be closed until their next round of tests on Monday, and when points are awarded they will take two and Leicester four from the axed match under league regulations.

With more transmittable strains of Covid now in circulation and following a worrying trend of cancellations the league’s organisers have decided to introduce harsher strictures around training and match-days designed to minimise unnecessary contact.

Sportsmail has learned that includes no ‘post-try face-to-face celebrations’ on match-days, ‘non playing players’ will no longer be able to attend games to boost home support and players will have to take food away from the ground after.

While social-distancing and face covering measures will be tightened up too all pre-match warm-ups will now be filmed to help identify close contacts in the event of an outbreak.

So far, five of the last 18 Premiership games have been called off this season – all in the most recent three rounds – and seven clubs have been affected.

Newcastle vs Leicester – Round 4

Bath vs London Irish – Round 4

Worcester vs Harlequins – Round 5

Northampton vs London Irish – Round 5

Northampton vs Leicester – Round 6

Saints and Tigers have gained the most points from cancellations. Current regulations hand four to the team not at fault, and two to the club that were.

And at training ice-filled recovery baths are no longer allowed, changing rooms should only be used to shower, all meetings must either take place outside or virtually and food must not be eaten indoors.

While Premiership players are tested for Covid at least once a week these measures are designed to help further reduce transmission. At present, the league expects the five other matches this weekend to go ahead.

Chris Boyd, in charge of Northampton who have seen two consecutive matches called off after their Irish game fell last week, said of the derby cancellation: ‘We has been absolutely rigorous in how we have followed the protocols laid out for us, and despite returning a number of positive tests this week, we were confident that we have more than enough of our squad still healthy and available to play the game if required.

‘However, we are following the advice we have been given, which was not to play the game and to close our training facility until next week.’

Steve Borthwick at Leicester said: ‘We understand the situation, having been through it, and will offer whatever support we can to our friends down the road.’

Exeter’s Rob Baxter revealed the Chiefs have had positives but will test players again in the coming days to make sure they can play Bristol, who are all clear, on Saturday.

‘We feel a responsibility to get on top of things very quickly and not risk players going on to the field with anything, or risking transmitting anything to Bristol,’ said Baxter.

Up at Newcastle, director of rugby Dean Richards has said the Falcons have been using ‘rapid-flow’ tests to supplement the usual rounds coordinated by Randox and thinks others should too.

‘I don’t see why they can’t be used more going forward depending on the accuracy of them.

‘They are far cheaper than the system we’re using at the moment, but we still need the baseline figure that Randox gives us at the moment.’

• Face coverings must be worn at all times, within buildings

• Training schedules must be reviewed to reduce player time at the facility and minimise any requirement for showers (gym/weights, followed by pitch training sessions)

• No external non-tested visitors, with the exception of UKAD and essential staff

• Food must now be a grab and go take away system only i.e. no indoor eating

• Transport plan and procedures reinforced (socially distanced and face coverings), no car sharing; seating plans (coach/plane) to be made available on request for the contact tracing process

Danny Cipriani has one game to stake World Cup claim