Rugby Australia will pitch a player draft and ask New Zealand to send over its surplus players to ease depth fears about Australian Super Rugby sides.

RA chairman Hamish McLennan said he would propose a competition-wide draft if Australia was forced to go it alone with another Super Rugby AU season next year. 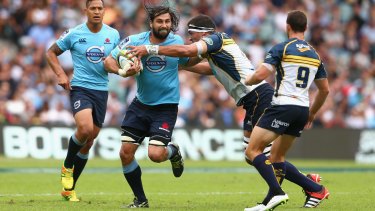 Jacques Potgieter is the benchmark foreign import from the past decade. Credit:Cameron Spencer

McLennan wants to make it a standout feature of the Australian competition – whether it's in a trans-Tasman Super competition or a domestic tournament – in the same vein as AB de Villiers, Dale Steyn, Rashid Khan and Andrew Flintoff's participation in the BBL.

"If we're a destination and it's the premier professional competition in the world then it's going to bring players out for nine to 12 weeks and then let them go," he said.

"This is a moment in time where we can do something completely different and it would work and we should not waste this opportunity. Obviously the Kiwis have to buy into it and it's not invented by them so they might be reticent."

Convincing New Zealand to sanction its players playing in Australia will be a tough ask, but NZR is already funnelling players to Japan as a way of coping with the overseas player drain. It has been happening in an unofficial capacity for a number of years, with the likes of Taniela Tupou, Pete Samu and Sekope Kepu moving to Australia in search of opportunities.

There is also an argument that the Australian system is not the rough-hewn goat track it once was. There is now a method behind the movement of coaches, with director of rugby Scott Johnson overseeing a national high-performance framework.

Some of the country's top practitioners have been repatriated, such as Scott Wisemantel, Matt Taylor and Jim McKay, and the likes of John Pryor and Damian Marsh on the strength and conditioning side. Force coach Tim Sampson, Junior Wallabies coach Jason Gilmore, Brumbies coaches Dan McKellar and Peter Hewat, Melbourne assistant Shaun Berne and NSW forwards coach Matt Cockbain, among others, are all on the RA radar.

McLennan said he was confident overseas players would slot into solid rugby programs and that Super Rugby AU was starting to show Australia was bridging the gap.

"The last round proves that our standards are improving and the quality of the rugby is getting better," he said. "I'm feeling a little more confident about the player question."