Rugby Australia has emphatically ruled out the possibility of the Wallabies playing the first Bledisloe Cup match of the year on October 10.

The governing body has instead proposed three alternatives, which could result in three Bledisloe Cup Tests instead of four. 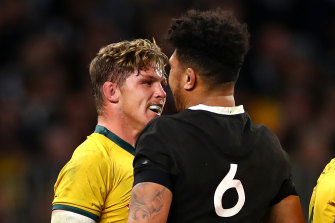 Michael Hooper’s Wallabies could depart for a Bledisloe Cup series as soon as next week.Credit:Getty

Contractually, the fourth Bledisloe clash is considered a "bonus" and could be axed from the schedule if the two parties don't come to an agreement soon.

I believe we will be able to find a workable solution to make the Bledisloe Cup happen.

"I don't anticipate that being an issue," Ardern said when asked if there was a possibility the Wallabies would refuse to play. "I believe we will be able to find a workable solution to make the Bledisloe Cup happen. We are still working through logistics.

"Keeping in mind … it is a different risk profile for teams from Australia than the likes of South Africa or Argentina."

Tensions on either side of the Tasman have been high in the past 24 hours after Dave Rennie labelled an NZR plan to play the first Bledisloe Cup match on October 10 “unacceptable”.

The Wallabies coach's chief concern is the limited preparation it will provide his squad – which includes several fresh faces – due to New Zealand's quarantine protocols.

Current rules would not allow the entire Wallabies squad to train together until October 5, whereas the All Blacks would be permitted to work as one group in the lead up to the first Bledisloe.

If quarantine protocols were eased, the first match could go ahead in Wellington on October 10, as NZR initially hoped. But RA sources do not believe the NZ government will budge.

Logistics and scheduling of The Rugby Championship also remain in the air.

When the tournament was set to be played in New Zealand, the Herald was told NZR was reluctant to condense the schedule in order to have the final fixtures played on December 5.

But with the All Blacks now the team that will have to undergo a two-week quarantine before they can see their families for Christmas, NZR is happy to have the schedule condensed.

The shortened schedule will likely see a midweek Test – or a double header – played at Newcastle's McDonald Jones Stadium in either the last two weeks of November or the first week of December.

The All Blacks may also have a headache on their hands in the playmaking department. A report in New Zealand media on Monday indicated Beauden Barrett, Richie Mo'unga and TJ Perenara are all reluctant to leave their families for two months. Mo'unga is expected to address the report publicly on Tuesday.

‘The time is right’: Moeroa to debut for Waratahs as Harrison earns another start