When Manu Tuilagi rampaged over for a try just before half-time, a shock was on the cards but it turned into the expected end of the English challenge in the Heineken Champions Cup as Sale succumbed to the genius of Finn Russell.

It wasn’t his day, it wasn’t Sale’s day and it wasn’t English rugby’s day. Tries by Juan Imhoff and Max Spring in the last 10 minutes reinforced the dominance of Racing — and of French rugby.

Sale led 10-6 at the break after dragging their vaunted opponents into a savage, stop-start scrap but when Racing cut loose in the second half, they overwhelmed the Sharks. 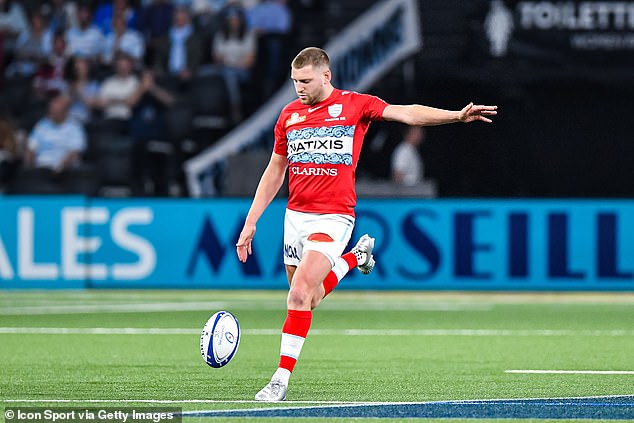 As was the case last year, there will be three French teams in the last four of Europe’s blue-riband event — and none from England.

That is a fair reflection of the balance of power at a time when an impending reduction in the Premiership salary cap threatens to widen the gap.

Once they were free of Sale’s shackles, Racing ran amok to score four tries, including a brilliant and slightly fortuitous solo strike by Russell, and a clinical finish by Teddy Thomas which Scotland’s artistic No 10 created. 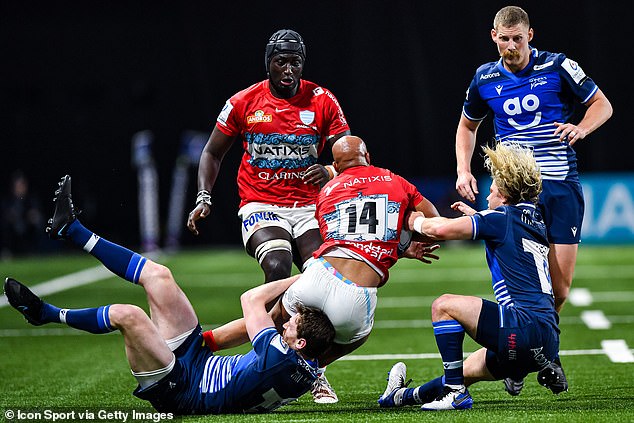 Racing had the luxury of unleashing a cavalry charge of stellar replacements from their bench: Test stalwarts such as Bernard Le Roux, Trevor Nyakane, Virimi Vakatawa and Maxime Machenaud.

Sale couldn’t match that firepower. But there were no excuses from Alex Sanderson, the Cheshire club’s director of rugby, or complaint about uneven resources.

‘It’s really frustrating but I don’t think you can argue with the result,’ he said. ‘We got hold of Finn Russell in the first half, but after half-time their off-loading game started coming and the bounce of the ball went their way.

‘We need to get better. I believe we will get better. We’ve got a taste for it now. I’m pretty certain it won’t be the last time we’re into these kinds of occasions.’ 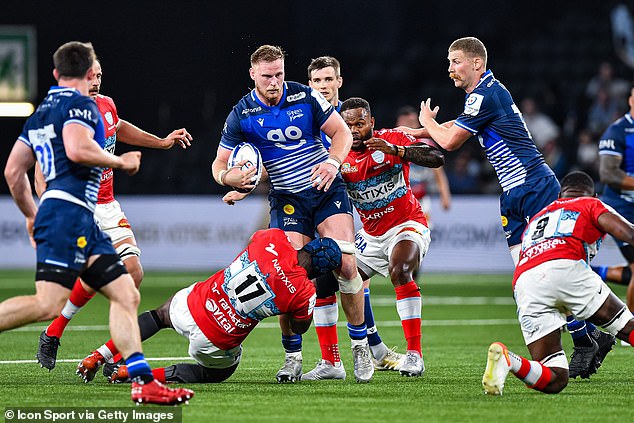 The victors’ reward is a semi-final showdown with La Rochelle in Lens on Sunday.

As for Sale, they will prepare for two final games of the Premiership season, with the desire to provide a fitting send-off for Faf de Klerk, their Springbok scrum-half icon who is leaving for Japan at the end of the season.

Tuilagi’s try came with 40 minutes on the clock. Sale had manned the barricades in a stop-start contest and from an attacking lineout and a loose pass, the England centre twisted into space and burst through the 22 to score.

But the tide soon turned. First, Russell was the creator as his cross-kick reached Thomas, who somehow stayed in touch, kicked ahead and re-gathered to touch down. 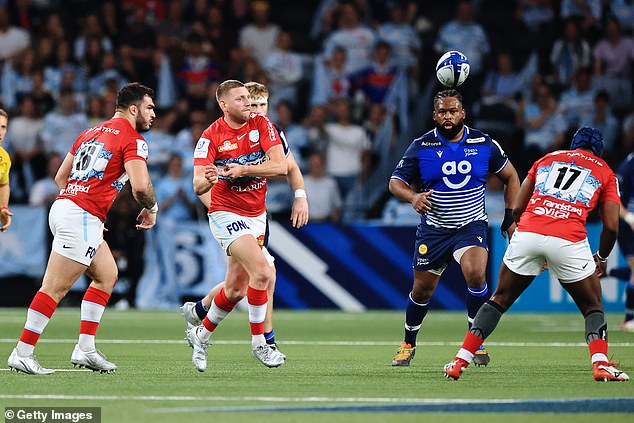 After home scrum-half Nolann Le Garrec struck another penalty — in a personal haul of 19 points from the tee — Russell showed an opportunistic streak to propel his side into a commanding lead.

The playmaker volleyed AJ MacGinty’s kick up-field and when the ball bounced back over the Sale No 10’s head into his path, Russell showed his skills and composure.

His next kick ahead was precise, the ball sat up and he dived over with a flourish.

Sale would not go quietly, as lineout drives led to tries by Akker van der Merwe and Ben Curry.

The latter had replaced his twin brother, England flanker Tom Curry, who limped off with a sore left ankle.

It wasn’t his day, it wasn’t Sale’s day and it wasn’t English rugby’s day. Tries by Juan Imhoff and Max Spring in the last 10 minutes reinforced the dominance of Racing — and of French rugby.