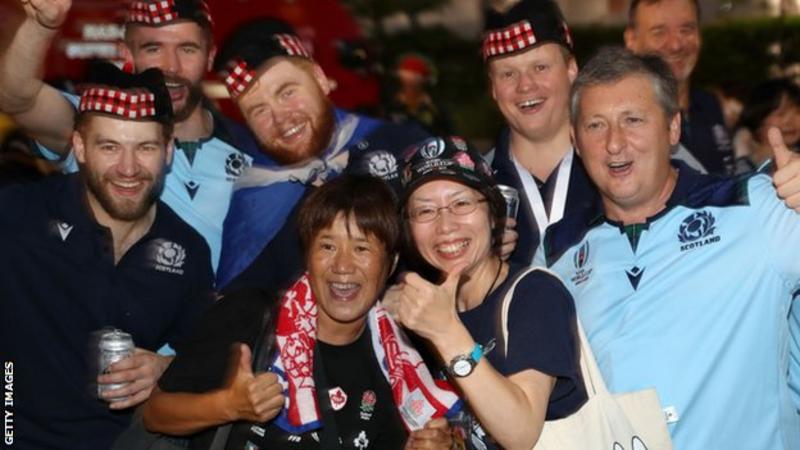 On Monday morning we woke to the news of a typhoon heading across the Western Pacific Ocean bound for Japan. The national meteorological agency called it Typhoon Hagibis and in our innocence and because it was thought it might damage Ireland’s prospects of making the World Cup quarter-finals and increase Scotland’s chances, it was nicknamed Hurricane Haggis.

Many Scots were laughing then. Nobody was laughing on Saturday as this thing started to growl its way towards Yokohama, the venue (hopefully) for Scotland’s monumental clash with Japan to decide who goes through and who goes out.

Even before Hagibis made landfall at Shizouka Prefecture at 7pm local time on Saturday, one person was dead in Chiba, three were missing after a landslide in Gunma, 211,600 homes were without electricity and evacuation orders had been issued to millions of households.

Planes were grounded, trains halted, roofs were ripped off buildings, record rainfall was recorded amid terrible flooding. At its centre, winds were measured at 162kmph and gusting at 234kmph. All day sombre news presenters stood in front of graphics depicting what they thought was the full scale of the horror approaching. You didn’t need to know the language to get the gravity of their message.

Around 6.20pm an earthquake with a magnitude of 5.7 hit offshore at Katsuura in Chiba. More than 60 miles away the tremor was felt in Yokohama where the Scotland team are staying. Fraser Brown, Scotland’s starting hooker, tweeted a video of his hotel corridor creaking and moving from side to side.

On the 20th floor of the Vista hotel, as guests ate dinner, the building swayed gently. Japan has such an astonishing history of natural disasters that its people are stoic in such moments. The staff brought food as if nothing had happened. To them, this was normal and there was nothing to worry about. To the tourists, it was eerie.

Sunday will bring the sunshine back to Yokohama – but will we have a game? The word is that World Cup organisers will have a site inspection around 6am (22:00 BST) and will announce a decision between 8am and 10am. That’s not a hard and fast deadline. Technically, they can wait until six hours before kick-off – 1.45pm local (05:45 BST) – to make their call.

That was what Scottish Rugby thought they were going to do. It’s understood that they only realised a decision might come hours earlier when they read it in an online media report on Friday evening. They are livid at what they say is a lack of information and communication from World Rugby.

Relations between the two bodies could scarcely be worse. If the game doesn’t take place there’s going to be most ear-splitting outcry from the SRU. That row will run and run. On the face of it the SRU might be limited in their options but one thing is for sure – in the event of a doomsday scenario they’re not minded to go quietly.

Without wanting to be a hostage to fortune there were signs late on Saturday in Yokohama that Hagibis, mercifully, was not going to wreak the terrible havoc predicted and that loss of life and damage to infrastructure would not be anywhere near the realms of the horrors of Kanto and Izu typhoon of 1958, a disaster that killed 1,200 people and one that Hagibis had been said to rival.

‘Japan have electrified the tournament’

What does it all mean for the almighty saga of Scotland’s denouement with Japan on Sunday? It’s still too early to say. Nobody was at the stadium when the heaviest rain fell and when Hagibis was at its most violent, so nobody knows what damage exists there. Flooding is a major worry.

The organisers might still call it off on safety grounds, they might let it go ahead behind closed doors or, if the damage isn’t significant, the full show might go ahead in front of a capacity crowd. Nobody knows. Everybody is guessing until the team of inspectors do their work.

Scotland and Japan continue to prepare as if the game is a certainty, as they must. Even without the hubbub of Hagibis and the war of words between Scottish Rugby and World Rugby with Jamie Joseph, the Japan coach, throwing in his barbs as well, this was already a Test that captivated the sport. Now it’s an unmissable affair for anybody who has ever picked up a rugby ball.

If we get a game, the television audience in Japan will be enormous, in or around 60m. The hosts are the team with the support of much of the rugby world, beyond Scotland and Ireland who have a vested interest in them losing. Japan have electrified the tournament. Their brilliantly conceived win over the Irish was the highlight so far.

Remember that Scotland need to take four more points from the game than Japan – and Scotland are not in the business of going into the backyard of stellar teams and winning, never mind winning by such a margin. Discounting the victory over Italy in the neutral venue of Singapore, in Townsend’s time they’ve have only managed three away wins against Tier One counties – that’s what Japan realistically are now – and only one of them, Argentina in 2018, was by the margin of victory that will cut it on Sunday.

Of course they could win by less than seven points as long they got a four-try bonus point. That’s hard to see, however.

Joseph complained the other day that his boys have been disrespected in places. It’s hard to know if he meant it or if he just said it in the hope that his players believed it, adding more fuel to their fire. It’s not true, though. From Scotland there’s been nothing but respect for this Japan side.

They are a team of skill and work-rate and ambition, a side that can play at pace while maintaining accuracy. Theirs is a chaotic brand of rugby. Fitness levels are sky high. They have not lacked for mental resilience. Japan proved against Ireland that speed can be just as effective as power in the modern game. Ireland’s grunt was no match for their energy.

Led by the magnificent Michael Leitch, they are an all-round fine side, hewn from their Sunwolves experiences in Super Rugby. If Scotland were to win with that magic margin of eight points it would go down as arguably their most significant single victory in two decades.

Scotland routed Samoa and Russia. Sub-standard opposition, for sure, but Gregor Townsend’s team had a mental toughness about them that impressed. Have they found something in youth? Sunday will tell. Darcy Graham is an irrepressible character. Fearless. Magnus Bradbury is building on his promise. Jamie Ritchie is showing what a belligerent player he is. Blade Thomson is living up to the hype, but this is their ultimate Test now. This is where they sink or swim.

Yes, we couch everything in the knowledge that it was just Samoa and Russia, but the attitude was a million times better than it was against Ireland. With Scotland you sometimes feel that getting the right mindset is half the battle. They’ve had it in recent games and if they have it again in Yokohama then a classic may ensue.

They believe they’re ready while acknowledging that they’ve been down this road many times before and have flopped. This is an away game and we know what Scotland are normally like when playing in another team’s stadium with the pressure on. At their best they can do this, but Nostradamus would have given up predicting what this team was going to deliver from one week to the next.

If they get to travel to the stadium then they’ll travel in hope to play a superb team, but a team possibly burdened by expectation. The one true wish is that the game is played and that the governing body of the sport don’t further undermine their own credibility by having to call it off. The rugby world wants to see this one. The anticipation, and the stakes, are as high as the highest skyscraper in Yokohama.

Brent Pope: 'Leinster prove they can play the game any way they want'