It was at Middle Harbour Yacht Club, after Rob Clarke and Patrick Delany finished their sailing races on Saturday afternoon, that the interim Rugby Australia chief executive pulled the Foxtel boss aside to tell him the bad news.

The RA board had voted unanimously last Thursday night to sell their domestic rights to Nine and Stan in a landmark deal. It was a very rugby location for the pay television supremo to be told the 25-year partnership was at an end. 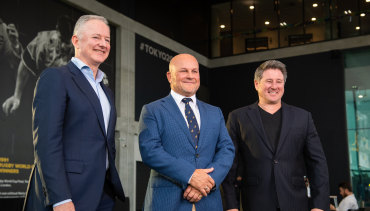 The parting comes a year after then RA chief Raelene Castle knocked back a $US25m a year offer from Fox to retain the rights from 2021 to 2025, sending relations between the parties south fast. Things improved with Clarke and a new chairman, Hamish McLennan, at the helm, but that same duo also ended up winning over a new pair of suitors, Nine chief Hugh Marks and Stan CEO Mike Sneesby, with Marks admitting he wouldn’t have entertained doing a deal with rugby amid the chaos of the previous regime.

After years of self-inflicted drama, from costly mistakes in the Israel Folau controversy to the soap opera of Michael Cheika’s reign over the Wallabies, it looks to be the best piece of business rugby has conducted in a long time.

Put together on the RA side by Clarke and John Knox, the former Credit Suisse Australia chief executive who negotiated Cricket Australia’s record $1.18 billion television contract two years ago, it is worth about $38 million a year over three years with an option for a further two.

Sources with knowledge of the deal say about $30m a year is in cash, with the rest in contra, and despite the impact of the pandemic on sports rights, Clarke said it comfortably surpassed the domestic component of RA’s previous $57m a year broadcast arrangement signed in 2015. 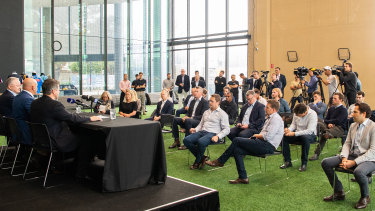 The key was in the timing. Nine, the owner of this masthead, was eager for a launch project for its new Stan Sport offering and by reducing its deal with the National Rugby League in May, it has effectively been able to pick up an entire sport.

Clarke said “the opportunity to get Super Rugby, in particular, on free-to-air television was a very significant factor” in siding with Nine, as was a chance to appeal to a younger audience with a refreshed presentation.

"The fantasy has become a reality for the Australian rugby community," Clarke said.

The deal is a groundbreaking one in that it’s the first in Australia in which one media entity controls the rights to a major sport in front of and behind a paywall.

That said, it is not without question marks. One is whether Super Rugby, a product that has been on a steep decline, can be dressed up enough to be a strong enough free-to-air performer on Saturday nights for Nine. Another is whether there are enough games in the "showbag", as Clarke called it, to drive subscriptions to Stan Sport, which will be a separate cost to Stan itself.

Rugby has a loyal core audience but gauging it's exact size has been made more challenging because Foxtel never revealed its Kayo numbers for rugby, even to RA, in a move interpreted by the sport as a bid to keep the rights price down. At the heart of the matter is how many of those rugby supporters who have Foxtel’s sports streaming service will migrate to Stan.

Marks is confident the game will be profitable for Nine.

“You just get that sense that it’s a great time to get into rugby,” he said.

It’s not something many people have said about the sport in Australia for a while. But two days after a rare triumph over the All Blacks by a youthful Wallabies, the game looks finally headed for some smooth sailing.

Best: I nearly quit as captain over trial 'pressure'

Rebels thrill then scare in last-gasp win over Highlanders