Lukhan Salakaia-Loto could answer an SOS from the injury-ravaged Wallabies and join the squad ahead of Saturday’s series decider against England at the Sydney Cricket Ground.

With Rory Arnold only due home from France this week and squad member Ned Hanigan nursing a knee complaint, Wallabies coach Dave Rennie is considering Salakaia-Loto over Reds youngster Ryan Smith, who is playing for Australia A in the Pacific Nations Cup.

Once a Wallabies fixture under Michael Cheika, Salakaia-Loto has barely been sighted in the professional game since announcing his departure for UK Premiership club Northampton earlier this year.

He was dropped cold by Queensland coach Brad Thorn in the final rounds of Super Rugby and left out of Dave Rennie’s original Wallabies squad for the three-Test series against England, having earlier been overlooked for a national contract.

The 30-Test Wallaby has instead thrown himself into club rugby, playing for Souths in Brisbane’s Hospital Cup ahead of his trip north. He is understood to have kept in touch with Rennie and offered his services if the need arose.

Arise it has, and with a vengeance, with four more players felled by series-ending injuries in the second Test loss to England at Suncorp Stadium. 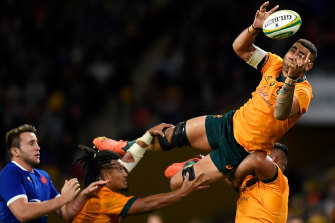 Lukhan Salakaia-Loto was a Wallabies mainstay during the Michael Cheika era.Credit:Getty

Caderyn Neville injured his knee in the 58th minute. On the back of Darcy Swain’s two-week suspension and a calf injury to Jed Holloway before the first Test, that was the end of the Wallabies’ preferred starting second-row combination. Matt Philip and Nick Frost are the two left standing, with Frost making his debut in Saturday’s 25-17 loss.

Versatile Waratahs forward Hanigan is understood to be dealing with a knee complaint and although there were hopes Arnold – an early Rennie favourite – might link up with the Wallabies in the back end of the series, it is unlikely he will arrive back from France with enough recent game time under his belt to be considered.

Rennie could also use Rob Leota in the second row and play Pete Samu or Harry Wilson in the back row with Michael Hooper and Rob Valetini.

The scenario was enough to draw a wry comment from prop James Slipper, who has been working overtime on the tighthead side of the scrum to cover the absences of Taniela Tupou and Allan Ala’alatoa, respectively.

“I may as well just go to the second row next week,” Slipper joked. “It’s obviously a test. But I’ve been proud of every bloke that’s come into the jersey. Nick (Frost) did a wonderful job off the bench and one thing I do know at the moment is there’s a lot of depth in our squad. They’re not there just to make up the numbers, they’re there on merit and they’re really challenging for those spots.

The Wallabies’ front-row stocks also took a hit with Scott Sio picking up a shoulder injury. “[He] just lost feeling in his arm, so something to do with a neck and shoulder,” Rennie said of the Brumbies loosehead. Tight-head Ala’alatoa has been ruled out through head injury protocols, which now mandate a 12-day stand-down period.

Australia’s backline stocks are also being tested, with fullback Jordan Petaia at extremely long odds to make the decider after taking a bad knock to the head in the third minute and Izaia Perese facing a long stint on the sidelines with what is believed to be a ruptured patella (knee) tendon.

In the only bit of positive news to come out of the casualty ward, centre Len Ikitau should be good to go after missing the second Test.

Rennie was in no mood to use the growing body count as an excuse for Saturday’s loss.

“I don’t want to sit here talking about injuries,” he said. “It’s part of the game and we’ve lost a few but it wasn’t the reason we lost.”

Watch the Australia-England decider from the Sydney Cricket Ground on the Home of Rugby. Streaming ad-free, live and on demand only on Stan Sport.

Alan Quinlan: 'Murray and Co must think outside the box-kick if Ireland are to give rivals the boot'