When England launch their World Cup against Tonga in Sapporo a week on Sunday, it will be familiar territory for their head coach, in more ways than one.

Eddie Jones, 59, has vast tournament pedigree, having led his native Australia to the final in 2003, acted as a consultant for South Africa’s triumphant 2007 campaign and guided Japan to the historic upset victory over the Springboks four years ago.

Meanwhile, his family and coaching connections with the host nation will mean that Jones and England should be prepared for what awaits and well supported wherever they go.

Here, the man in charge of England’s 2019 challenge meets the man he is striving to emulate; Sportsmail columnist SIR CLIVE WOODWARD, whose national team secured global glory in 2003 — against Jones’s Wallabies. Rugby correspondent CHRIS FOY was on hand to maintain order… 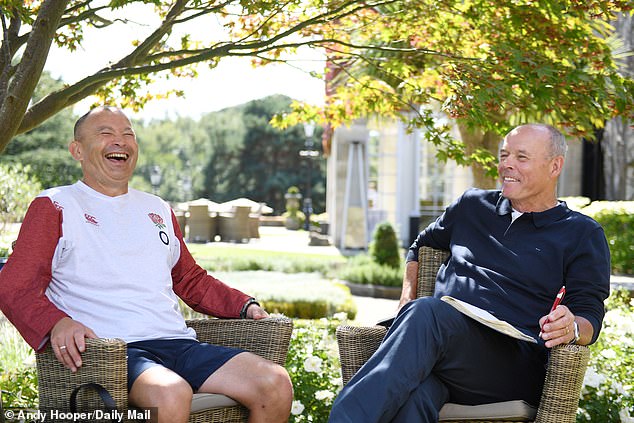 CLIVE So, this will be your fourth World Cup, Eddie. What have been your best and worst moments in past tournaments — or is that an obvious question?!

EDDIE Actually, the best moment for me with Japan at that last World Cup was the game against the USA. We were out on our feet. We’d already created history, by beating South Africa. There was nothing to play for. We missed out on a quarter-final but I was so proud of those players; they stuck it out and beat an American side who had set that as their priority game.

CLIVE Yes, obviously that was my best World Cup memory, but back in 1999 I remember watching and feeling helpless as we lost to South Africa by five drop goals. You can see the clock ticking and you’re just sat there thinking that there’s absolutely nothing you can do about it. There is a lot of pressure on the England head coach at a World Cup — does the job feel different in that way to the ones you’ve had before?

EDDIE England’s a funny one because of the media exposure. Everything we do gets scrutinised 10 times more than Australia and South Africa. There’s just so much interest in the national team and I would say that rugby is one of the foundation sports of English society; cricket and rugby. So the national team holds a special place. It might not be as popular as football, but it still holds a special place.

The scrutiny is so much more here, but does that put pressure on? If I was a younger coach, it would feel like that, because when you’re younger you’re more sensitive to criticism and praise. But now that I’m at an elderly age, you don’t worry about those things so much, which means you can just get on with the job. 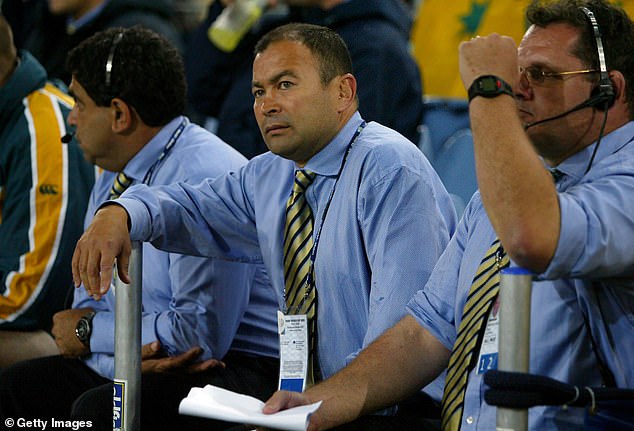 CLIVE So are you able to totally block out the external ‘noise’ now?

EDDIE I can block it out, but the players are always going to be affected by it. One of the things we want them to do is to find their strength within the team and not rely on outside praise. It’s harder with this generation because they live their lives on Instagram and Facebook.

CLIVE I always felt when you have a great team and you’ve prepared really well, it takes the pressure off because whatever happens, you can look yourself in the mirror and know that you couldn’t have done any more. Does that make sense?

EDDIE Yeah! There’s that great American football coach, Chuck Noll, who said ‘There’s only pressure when you don’t know what you’re doing.’ That sums it up for me.

CLIVE With the World Cup taking place in Japan, can you explain the background to your links with the country?

EDDIE My mother is Japanese, but her family moved post-World War One to America. A lot of Japanese emigrated and they ran the orange farms around California. Her father was an orange farmer. When World War Two happened, they were all put in internment camps, then she went back to Japan.

She had a Japanese face but she was basically American, because she had been brought up in America and had American characteristics and culture. She was an outsider in Japan then, when she came back. Then she met my father and they came back to Australia. We were brought up 100 per cent as Australians. I had nothing to do with Japan, or the culture, until I finished playing.

A Japanese university side came to train at my club, Randwick, and they asked me to do a coaching session. So I did a couple of sessions and then they rang and said, ‘Can you come over and do a month’s coaching?’ The game was just about to go professional — it was in 1995. So I went over and I loved it because I just love coaching. 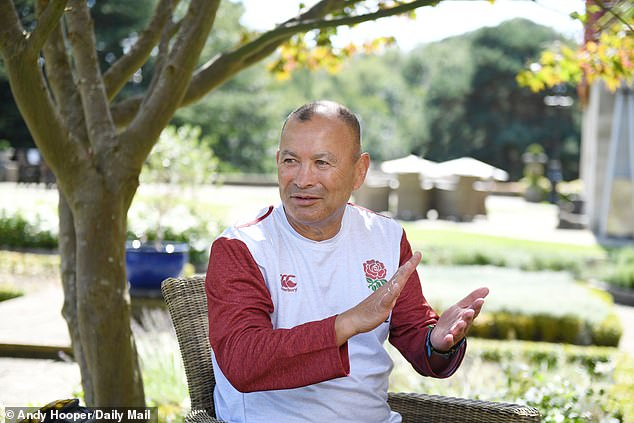 I applied for the Waratahs job in 1996; Glen Ella and I got down to the last two but missed out. Then this Japanese university offered me a full-time job, so I went to coach over there. Everyone said I was crazy. I can remember the salary. I was earning Aus $80,000 at the time and I was offered half that — so I basically gave up everything, but I wanted to coach.

My wife and I were teaching at the same school for years, but we’d had nothing to do with each other. Her father died, she was leaving the school, and I was about to come over and play for Leicester — where I spent half a season. We ended up meeting at the school at a farewell function and we got on well. I said, ‘Why don’t you come to Leicester with me?’ That was in 1992-93. We ended up getting married.

Through a series of jobs, I ended up at Saracens. I signed for four years. I bought a house and sold everything in Australia. That was going to be the job. Then the South Africans took over and a new CEO came in. I couldn’t get on with this bloke so I decided to quit, halfway through the season.

My daughter had been in Australia and England and her schooling was getting a bit problematic, so we decided to go to Japan, because we knew a good international school. So we went to Japan for her education and I coached the Suntory team. We won three of the four trophies, so I got offered the national job.

CLIVE You are going into this World Cup after being in charge of England for the last four-year cycle — how would you say the team and the players are different now, compared to when you took over?

EDDIE We’re massively fitter. That was one of the things that stood out when I first came over. I couldn’t believe the fitness levels of the players. Also, the team is more self-driven now. They were looking before for people to give them guidance. Modern players here are disciples of the academy system so they’re all being told what to do, but the game demands you to be a leader, so we have tried to free them up and allow them to lead the side a lot more. 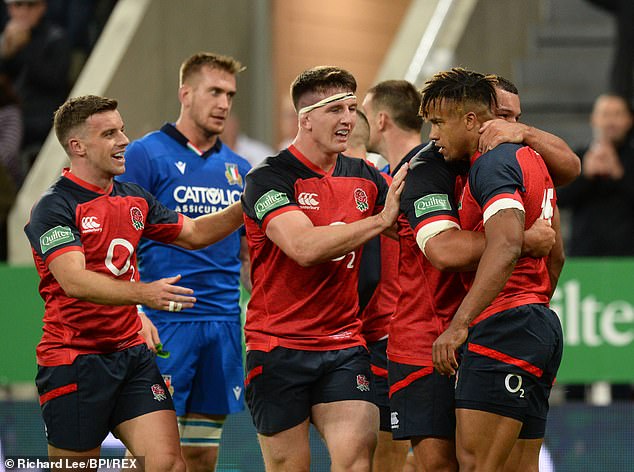 CLIVE As well as having more leadership within the squad now, do you also think you have more world-class players than you did when you took over?

CLIVE You’ve stated from day one that the only goal for you is to win the World Cup. Even with your amazing win-loss record, are you aware this is how you will be judged and is that how you’d want it?

EDDIE Absolutely. What you can do at a World Cup — and you know this from 2003 — is you can change rugby history in this country. All the kids and their parents want to be involved in rugby, sponsors want to be involved and there’s a great feeling. That’s the power of the World Cup, if you have a good campaign. It’s a great thing to be involved in. Given England’s record since 2003 hasn’t been fantastic, it’s a great opportunity for us to do something special for the country.

CLIVE You are well-known for your work ethic, but how will you switch off during the tournament?

EDDIE I tell you what I did in the last World Cup; I watched House of Cards and I read Harry Redknapp’s book — that kept me entertained!

You’ve got to find ways to switch off at night, otherwise it becomes all-consuming. The big thing for coaches is to be fresh and to have a clear mind, because it is a full-on tournament. It’s the only time you can have seven games in seven weeks, so the ability to keep yourself fresh is crucial. Again, experience helps with that. You know when you have to have a bit of a break.

I tend to relax by going out and having a nice glass of red with the coaching staff, when we’re in a tournament. I enjoy that, just talking about rugby, because I love rugby. But for the first time, my wife is coming over for this tournament, so I’ll have to make sure I keep her in the right spot! 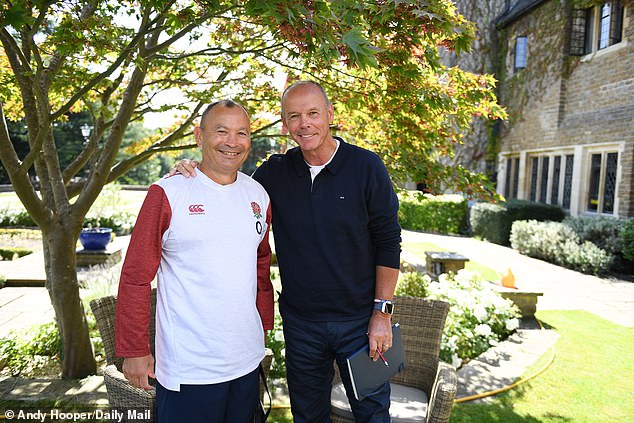 CLIVE In the time that you’ve been in charge of England, especially last year when you had a run of defeats, has there ever been any doubt in your mind about what you were doing? Was there any time when the stress of it all just got too much?

EDDIE Obviously, you find defeats hard, but at the back of my mind I always knew we’d go through that, because we had to change the team. We set out with a certain team that was easy to get quick results with, but you never know whether senior players will keep their form, keep their fitness and keep their desire. We have had to move on a few players who we perhaps didn’t think we would have to move on, so we had to change the team and experience a bit of pain. But a bit of pain is good for you in the end.

CLIVE Whatever happens from this point on — whenever you stop doing this job — how do you want to be remembered? I was asked that once and the question stuck with me, so how do you answer it?

EDDIE I want to be remembered as someone who has always given to the game and given opportunities to young players to get better. I’ve put pride into the game. I’m not English and I’ve never pretended to be English, but what I most want to see are this England team playing with pride. These guys have to show pride for their country and play as if it’s the only thing that matters. We want to win it, but the key for me is that we play with pride and passion, and make everyone in the country proud of their team.

CLIVE Good luck, Eddie — bring it home. I hope to join you for a glass of red after the World Cup final on November 2, with the trophy back in England’s hands.

WATCH: ' It won't sink in for a while, it's class' – Ireland qualify for 2020 World Rugby Sevens Series